Canada, nearly 200 other countries agree to “phase down” hydrofluorocarbons

Canada and the 196 other countries that are part of the Montreal Protocol on Substances that Deplete the Ozone Layer have agreed to phase down hydroflourocarbons (HFCs), greenhouse gases that can be hundreds to thousands of times more potent than carbon dioxide. 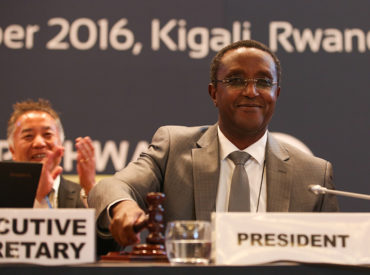 Reducing emissions of HFCs under the Kigali Amendment can prevent up to 0.5°C of global warming, while continuing to protect the ozone layer, according to a statement on Saturday from the United Nations Environment Programme (UNEP).

Endorsed in Kigali, Rwanda on Saturday, the amendment to the 1987 Montreal Protocol “is the single largest contribution the world has made towards keeping the temperature rise ‘well below’ 2 degrees Celsius, a target agreed at the Paris climate conference last year,” UNEP said. Calling the Montreal Protocol “the most successful UN environmental agreement in history,” UNEP said that it has led to a 98% decrease in the production and use of ozone-damaging chemicals and contributed to mitigating climate change.

Commonly used in refrigeration and air conditioning as substitutes for ozone-depleting substances, HFCs are currently the world’s fastest growing greenhouse gases, their emissions increasing by up to 10% each year. They are also one of the most powerful, trapping thousands of times more heat in the Earth’s atmosphere than carbon dioxide.

“The faster we act, the lower the financial costs will be, and the lighter the environmental burden on our children,” said Rwanda President Paul Kagame in the statement. “That begins with a clear signal that change is coming and it is coming soon. In due course, new innovations and products will allow us to phase out HFCs even faster, and at lower cost.”

The rapid growth of HFCs in recent years has been driven by a growing demand for cooling, particularly in developing countries with a fast-expanding middle class and hot climates, UNEP explained. The Kigali Amendment provides for exemptions for countries with high ambient temperatures to phase down HFCs at a slower pace.

Following seven years of negotiations, the 197 Montreal Protocol parties reached a compromise, under which developed countries will start to phase down HFCs by 2019. Developing countries will follow with a freeze of HFCs consumption levels in 2024, with some countries freezing consumption in 2028. By the late 2040s, all countries are expected to consume no more than 15-20% of their respective baselines. 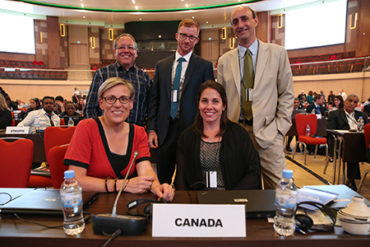 “It is not often you get a chance to have a 0.5-degree centigrade reduction by taking one single step together as countries – each doing different things perhaps at different times, but getting the job done,” said United States Secretary of State John Kerry. “If we continue to remember the high stakes for every country on Earth, the global transition to a clean energy economy is going to accelerate.”

Countries also agreed to provide adequate financing for HFCs reduction, the cost of which is estimated at billions of dollars globally. The exact amount of additional funding will be agreed at the next Meeting of the Parties in Montreal in 2017. Grants for research and development of affordable alternatives to hydrofluorocarbons will be the most immediate priority, UNEP reported.

Alternatives to HFCs currently being explored include substances that do not deplete the ozone layer and have a smaller impact on the climate, such as ammonia or carbon dioxide. Super-efficient, cost effective cooling technologies are also being developed, which can help protect the climate both through reducing HFCs emissions and by using less energy.

The Kigali Amendment comes only days after two other climate action milestones: sealing the international deal to curb emissions from aviation and achieving the critical mass of ratifications for the Paris climate accord to enter into force.

A press release from Environment and Climate Change Canada (ECCC) said that global HFC emissions “are the equivalent of approximately 1 billion tonnes of carbon dioxide annually” – the same as emissions from nearly 300 coal-fired power plants or over 200 million passenger vehicles driven for one year. These emissions are expected to grow nearly five-fold by 2050 if no action is taken.

“Canada played a key role negotiating the Montreal Protocol in 1987 and in negotiating the Paris Agreement in 2015,” said Catherine McKenna, Minister of Environment and Climate Change, in the release, issued on Saturday. “Today, in Kigali, Canada and the world have taken another very important step in the global fight against climate change by agreeing to phase down HFCs.”

ECCC reported that the government of Canada will “propose regulations to significantly reduce HFC consumption and prohibit the manufacture and import into Canada of certain products containing HFCs.” It has also introduced measures to increase the recovery, recycling, and destruction of HFCs in refrigeration and air-conditioning equipment and established regulatory provisions for an HFC-reporting system.