Tides are rising, sands are shifting and coastlines are crumbling. As studies warn of rising seas and accelerated erosion resulting from climate change, coastal communities in Canada are wondering what the future holds.

“Living on the coast is part of our economic, our social, our cultural fabric. It’s people’s livelihoods. It’s hard to move from those coasts,” said Chris Houser, an environmental sciences professor at University of Windsor and part of the school’s coastal research group. “It’s going to be a very difficult period as we see some of these coastal areas eroded or being impacted further by sea level rise and storms.”

Communities on Canada’s east and west coasts face the risk of slipping below swelling tides as water levels inch up. An Intergovernmental Panel on Climate Change report released last year said the rate of global sea level rise is accelerating, and seas have risen about 20 centimetres since the beginning of the 20th century.

John Clague, an earth sciences professor at Simon Fraser University in Burnaby, B.C., said even a few millimetres make a difference, especially when effects are exacerbated by fierce storms like Fiona which battered Atlantic Canada in September.

“It’s a disaster in slow motion,” he said. He noted that Fiona produced a lot of erosion. “And that’s permanent. Once it’s done, it’s done.”

On the other side of the country, municipalities such as Richmond, B.C., with a population of over a quarter of a million people, are living with a “threat at their doorstep,” he said. The area is home to the Deltaport, one of Canada’s most important export facilities, as well as Vancouver International Airport and trillions of dollars worth of other critical infrastructure that cannot easily be abandoned or relocated, he said.

The most immediate solution being implemented is that newer buildings along the shore are elevated by a metre to account for expected sea level rise, he said, but that’s a temporary fix. 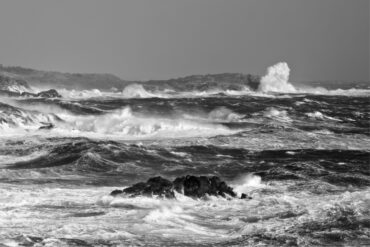 “We’re just kicking the problem down the road,” Clague said.

Houser said scientists don’t have a “good calculation” of how much land has been lost as sea levels rise because a combination of factors are involved. While rising waters claim land, he said there is also the added threat of flooding and erosion.

“A lot of erosion around Canada has nothing to do with sea level rise. But it really has to do with the imbalance of sediment,” he said.

When the seas come rolling in, the ecosystem adapts by moving landward. As long as there’s space to move, that’s fine, Houser said, but human communities are not so mobile. People may begin to abandon coastal communities affected by changing conditions, he said.

A study published in March 2020 by the European Commission Joint Research Centre said almost half the world’s sandy beaches face near extinction by the end of the century because of increasing greenhouse gas emissions.

Adam Fenech, director of the University of Prince Edward Island’s climate lab, said the province’s 1,260-kilometre coastline is at significant risk of erosion. Studies have shown the Island has seen erosion at an overall average rate of 0.28 metres per year between 1968 and 2010.

Fenech used that data to show coastline changes for the province over the next 80 years. His calculations show more than 1,000 homes, 146 commercial buildings, more than 40 garages, eight barns, seven gazebos, 17 lighthouses and 45 kilometres of road are at risk of being lost to coastal erosion by the end of the century.

The Island is “just made up” of sand and sandstone, and not a “very hardy” place to begin with, Fenech said. Adding climate change is making things worse.

“Sea levels are rising, the water temperatures are rising getting rid of the sea ice, which acts as a nice buffer against the storm activity. We have been getting stronger storms, so it’s all working against P.E.I. in terms of its future as an island now,” he said.

“The Island’s not going anywhere fast. It still would take 10,000 years for the Island to disappear. But there are some places where we’ve been losing coastline at one to five metres per year.”

Geological forces are still rebalancing from that weight, and the coastal edges are slowly slipping into the water, she said.

Picture a heavy person sitting in the middle of a waterbed with two smaller people at each end, Sherren said. “When that big person gets up, the people on the end will actually go down.”

And that’s what’s happening in the centre of Canada in this postglacial period, she said.

Fenech called P.E.I. the proverbial canary in the coal mine in terms of being at the forefront of climate change impacts. But that also gives scientists and governments a jump on understanding where and what the best methods are for adapting to and living with climate change, he said.

Houser said coastal communities hit by major storms will have to rethink how they rebuild, and whether certain areas have become off-limits.

“Are we going to force a different type of building and armouring of the coast? Or are we going to allow that area to be claimed by the water?”

When Hurricane Ivan hit the Florida coast in 2004, it was considered a one-in-a-100-year storm, he said.

“What happened is right after the hurricane – after every house got demolished, after the roads got completely torn up – house prices actually went up. The amount of building went up, because people believed that they were safe for another 99 years,” he said.

“There is an issue in the way people perceive and understand the science, understand probability. It’s even more difficult to translate when the frequency and magnitude of storms are actually changing.”

The erosion events seen in Prince Edward Island and Northumberland, N.S., this year after Fiona hit the area show they are going to drastically change the landscape, Sherren said.

“Maybe it’s not going to disappear in 20 years, but it is going to look very different. And that’s the duration of a mortgage.”

People need to understand that coastlines are dynamic, not static, she said.

“The floodplain belongs to the river, and the beach belongs to the ocean,” Sherren said, recalling a quote she once heard. “They don’t belong to us. And they can take it back whenever they want.”

Feature image: A newer seawall held up well during the storm on the Les Îles-de-la-Madeleine, Que., Sunday, Sept. 25, 2022. Coastal flooding remains a threat for parts of Nova Scotia, Prince Edward Island including the Northumberland Strait, the Gulf of St. Lawrence region including Iles-de-la-Madeleine and eastern New Brunswick, southwest Newfoundland, the St. Lawrence Estuary and the Quebec Lower North Shore. THE CANADIAN PRESS/Nigel Quinn