Desjardins Group and the Desjardins Group Pension Plan (DGPP) announced on Friday that they have invested more than $1 billion in renewable energy and clean technologies. 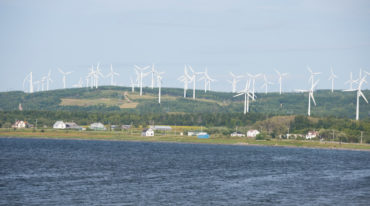 The financing came from Desjardins Group’s Capital Market Division and equity investments from the DGPP, with the contribution of two Desjardins insurance subsidiaries, Desjardins said in a press release. Of the $1 billion, nearly $550 million was invested in 31 wind farms, about $300 million in 14 solar energy projects and $155 million in nine hydroelectric projects and a biomass power plant, Desjardins reported.

Elsewhere in Canada, the DGPP invested in the Dokie Power Project (144 MW, British Columbia) and in a 680 MW platform, which has 10 wind farms and two solar farms across Ontario (8), the Maritimes (three) and British Columbia (one). The DGPP also invested in six wind farms in France, which generate 155 MW, the release pointed out.

The $300 million investment in solar energy projects (primarily in Ontario) includes a collaboration with the Six Nations of the Grand River and the DGPP of $72 million in the Grand Renewable Energy Parks, one of the largest photovoltaic solar farms in Canada (100 MW, Haldimand, Ontario). The DGPP also invested $55 million in the Kingston Solar Project (100 MW, Kingston and Loyalist Township in Ontario), while the Capital Markets Division helped finance four photovoltaic solar projects from TerraForm Canada (40 MW, Marsh Hill, Lindsay, Woodville and Sandringham in Ontario).

For clean technologies, the Capital Markets Division invested up to $160 million in three facilities with state-of-the-art environmental technologies: the construction of the North Shore Wastewater Treatment Plant, which will be operated by the City of Vancouver starting in 2020; the Hamilton Biosolids Project, which allows the City of Hamilton in Ontario to treat 60,000 tonnes of biosolids per year; and the Green Electron Power Project, a natural gas-fuelled, electricity generating plant (294 MW, St. Clair Township, Ontario).

“With a portfolio of $750 million in renewable and clean energy investments, the Desjardins Group Pension Plan was a pioneer in the wind, solar and hydroelectricity sectors,” said Sylvain Gareau, vice president of DGPP, in the release. “The assets make up half of our infrastructure portfolio. On Earth Day, we would like to recognize the Canadian investors who are building the economy of the 21st century.”

According to Jean-Yves Bourgeois, vice president of capital markets at Desjardins, wind and solar energy are the fastest growing sources of energy across the globe. “Canada is rich in renewable energy sources and we can see this in our infrastructure financing portfolio,” he said. “These energy sectors create high-value-added jobs and are drivers of growth for Desjardins. We’re proud to finance this growing strategic sector and to contribute to the development of clean and renewable sources of energy for Canadians.”

More News
Related
Making ICBC a co-op one option for B.C., competition must be part of any option selected: taxpayers federation
Ontario cap-and-trade won’t limit emissions through 2020: environment watchdog
CatIQ enters into agreement with Impact Forecasting to use cat event flood response footprints for Canada
Uber backs off plans to shutter Quebec operation, says it will continue for now