While the federal government understands the problem surrounding flood mitigation in Canada, “we’re not there yet” and the insurance industry and government are still working on a solution, a speaker said on Oct. 3 at the National Insurance Conference of Canada (NICC). 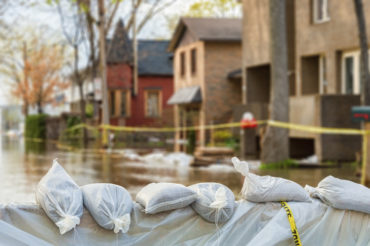 “There are ongoing discussions with senior officials responsible for emergency management to high level provincial and federal officials in the public safety realm,” reported Craig Stewart, vice president of federal affairs with the Insurance Bureau of Canada. “Where we do need improvement, however, is… how do we work better with realtors, with banks [and] ratings agencies to make this a broader discussion, so it’s not just governments and insurers, but others that have a stake in solving this?” Stewart asked.

During the session, Joel Baker, president and CEO of MSA Research, asked Stewart about a Flood Re-type pool. “It’s a tricky issue,” Stewart responded, describing a pool that would be administered by insurers that would help protect the 7-10% of people who live in high-risk areas. “Government wasn’t ready to proceed yet. They didn’t understand the nature of the problem and frankly, it took until these floods in the spring nationwide until this administration federally grasped that there was a real problem here that they needed to deal with,” Stewart said during the session titled Where Water Meets Underinsurance: Canadian Flood Risk – A Public Policy Imperative.

He said the federal government conceded that the existing disaster financial assistance arrangements are “flawed in that they are backstopping the risk federally and they are not leading to the right market incentives for people to, even if they are aware of the risk, take action. Until the insurance offering matures further, they won’t trust the insurance industry to take that on,” Stewart added. “The second thing that we heard was they didn’t want to [replace] one flawed approach that delivered the wrong market signals with another flawed approach. Somehow we have to figure out a way that we are incenting the right behavior.”

The panel’s moderator, Blair Feltmate, head of the Intact Centre on Climate Adaptation at the University of Waterloo, said that three standards are being developed to address flood mitigation through a combination of support from National Research Council Canada, the Standards Council of Canada and Canadian Standards Association. 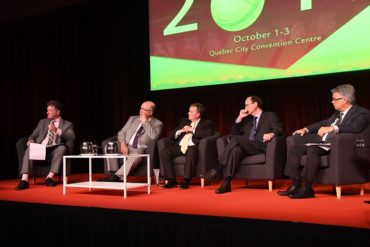 The first standard, which Feltmate reports should be available in August 2018, involves a home basement flood protection program that will be rolled out to homeowners. A trained person will visit the homeowner and identify “potential points of vulnerability as to how water can enter the basement, what needs to be corrected and all this material presented to the homeowner in a user-friendly fashion for them to act upon,” Feltmate told conference attendees. “Then inside the house you are looking at, if water did get into the basement, what could be done to make it such that we minimize the amount of damage? It’s amazing how much risk we can take out of the system in reference to basement flooding… for next to nothing that will make it such that [homeowners] probably won’t have a $50,000 flood down the road.”

The second standard relates to flood resilient community design in Canada using about 20 “fundamental characteristics,” with hundreds of municipal planners, engineers, designers, builders and others “on board,” Feltmate reported. The third standard, which hasn’t been finalized yet, looks again at fundamental characteristics that can be built into existing communities to attenuate flood risk.

Lastly, Feltmate reported that a new standard is being developed on adaptation for the electricity sector on generation, transmission and distribution, “because between now and 2035 in Canada, we have to spend $350 billion on new electricity infrastructure in this country.”

This year’s NICC was held in Quebec City from Oct. 1 to 3. The session Where Water Meets Underinsurance: Canadian Flood Risk – A Public Policy Imperative also heard from Lee Spencer, assistant deputy minister of emergency management and public safety with Manitoba’s Emergency Measures Organization; Gord Enders, president of Direct-Line Insurance and a former president of the Insurance Brokers Association of Alberta; and Alain Thibault, an industry expert and former CEO of TD Insurance.