How reinsurers are helping banks to assess their climate risk

After Canada’s solvency regulator said the financial sector must better respond to climate-related risks, one Munich Re executive says the global reinsurer is working closely with banks and other federally regulated financial institutions on their climate risk approach.

This follows Superintendent of Financial Institutions Peter Routledge’s speech in late 2021, when he stated Canada’s banking regulator OSFI has an obligation to ensure Canada’s financial sector and federally regulated pension plans are ready to manage the risks that will come as the economy shifts to “net zero” greenhouse gas emissions by 2050.

“Getting to net zero by 2050 will mean Canada’s economy will have to adjust,” Routledge said. “Canada’s financial system will be a critical enabler to that adjustment and OSFI has an obligation to ensure that FRFIs and federally regulated pension plans (FRPPs) are fit to manage the risks that will accompany that adjustment. We will innovate and adapt our regulatory practices, and that innovation begins now.”

Gottardo said that Munich Re is helping banks to better understand, identify and respond to the physical climate risks in their portfolios.

“As any good insurer would do, [we are] trying to find your peak exposures in your portfolio,” Gottardo explains. “That’s new to banking, they’ve never looked at this before. Once you understand your peak exposures and your areas of concentration, try to put a financial impact on that. ‘What happens if…?’ Once you’ve got an idea of where the risk is located, what might the size of the impact? How are you going to manage that risk?”

Munich Re’s approach is to identify and measure the impact, and then “manage” the risk for banks, he explained. 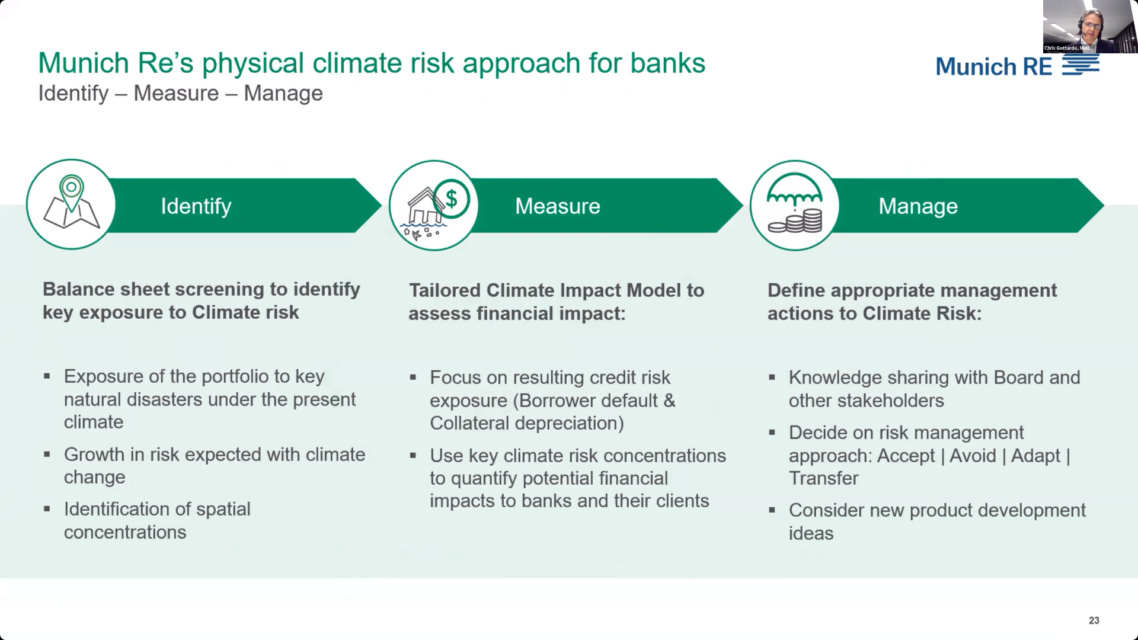 Gottardo presents a slide on how Munich Re approaches physical climate risk with banks.

When it comes to risk management, Gottardo said many banks are “passively accepting” risk. “For the studies we’ve done, we’d say between 15% and 20% of banking portfolios had some form of higher physical climate risk,” although it varies by country, he said, citing a rough estimate. 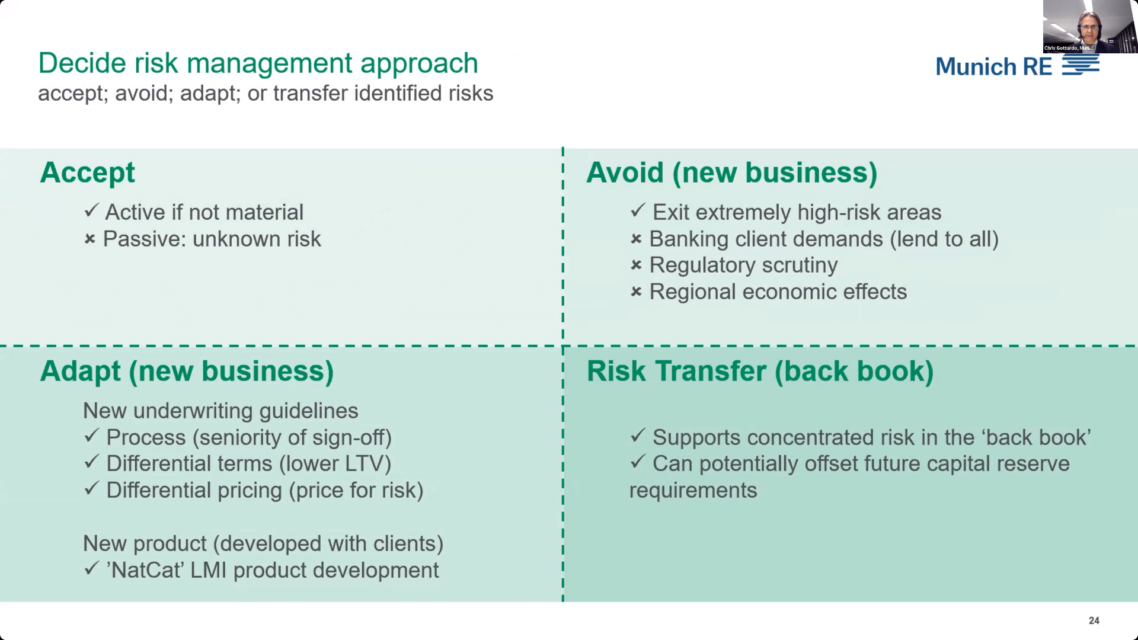 “Just like the banks that hedge their interest rate risk…[and] their currency risk, at some point it will come to the point where [banks are] just going to trade [their] climate risk,” Gottardo predicted. Where it moves from identifying [and measuring] the risk…to, ‘What are we going to do about the risk?’ Munich Re’s got the capital and the know-how to say, ‘We’ll take that risk from you at a price.’”

Gottardo said Munich Re helps banks assess their exposure to climate risk in “numerous” ways, including through: