Is climate change to blame for Alberta wildfires?

Is climate change causing the massive wildfires that are burning out of control in Alberta, which are now reportedly nearing half the size of the 2016 Fort McMurray wildfire?

Not on its own, but climate change can mean a fire season that begins earlier than before. It can mean bigger, hotter and faster-moving fires. It can mean more lightning, the cause of roughly half the wildfires in Canada. And it can also mean a season that can extend later, Glenn McGillivray, managing director of the Institute for Catastrophic Loss Reduction, wrote in an opinion piece published in the Globe and Mail May 29. 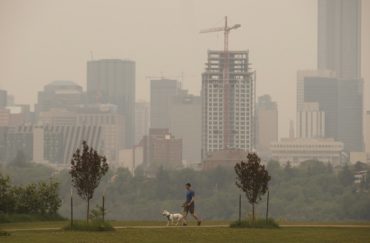 A person walks their dog as smoke blankets the city from nearby wildfires, in Edmonton on Thursday, May 30, 2019. THE CANADIAN PRESS/Jason Franson

“Climate change is a force multiplier: it doesn’t directly produce severe weather, but it does nurture and amplify it,” McGillivray wrote. “It takes something that likely would have happened anyway and makes it worse. It also loads the dice, making severe-loss events more likely to happen.”

Just how much does climate change contribute to severe weather events? “The reality is climate is a complicated stew made up of all kinds of different ingredients,” McGillivray wrote in the opinion piece. “Human-made climate change is just one of them, a spice that contributes to the overall flavour of the stew, but is difficult to single out when you have a little taste. You know it’s there, and you know it plays a role in flavouring the stew, but it is difficult to say exactly just how much.”

Increasingly though, science has gotten to the point where researchers can look at a particular hazard event and determine what specific role climate change played in the way that event unfolded. “Known as attribution science, we can clearly state that climate change contributed to a particular event and put a number on that contribution.”

Another study, published in the journal Earth’s Future in December 2018, looked at the role climate change played in the 2017 wildfire season in British Columbia. A record 1.2 million hectares burned in B.C. that year. The study found that the risk factors affecting the event, and the area burned itself, were made substantially greater by anthropogenic – or human-caused – climate change. “We show over 95% of the probability for the observed maximum temperature anomalies is due to anthropogenic factors, that the event’s high fire weather/behaviour metrics were made 2-4 times more likely, and that anthropogenic climate change increased the area burned by a factor of 7-11.”

Research has also found that the area burned in Canada has doubled since the 1970s, and that number is projected to double again by the end of the century.