OTTAWA – The Liberal government is defending its conditional approval of a massive liquefied natural gas project in northern British Columbia by pointing to what it calls a “historic partnership” on monitoring environment impacts. 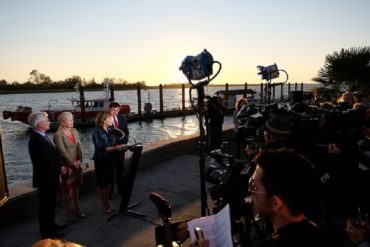 But critics are accusing Prime Minister Justin Trudeau of policy incoherence as his government promises to ratchet down greenhouse gas emissions while also fuelling the creation of millions of tonnes of carbon dioxide.

Related: Federal decision is at hand for proposed LNG plant in northern B.C.

Among the 190 conditions placed on the $36-billion project is an annual cap of 4.3 million tonnes of CO2 emissions over the estimated 30-year lifespan of the facility – enough to measurably raise Canada’s yearly output of greenhouse gases.

Environment Minister Catherine McKenna will be in Montreal next week to begin talks with the provinces on a plan to cut Canada’s emissions and says every new energy project the Liberals approve must fit within the national carbon framework.

The government is refusing to tip its hand on its next major energy decision: the proposed Trans Mountain oil pipeline expansion from Alberta to B.C., which Carr says will be judged on its own merits.