March and year-to-date second warmest on record for the world: NOAA

The March 2017 average global temperature was 1.89 degrees Fahrenheit above the 20th-century average of 54.9°F. Credit: NOAA.

The March 2017 average global temperature was 1.89 degrees Fahrenheit above the 20th-century average of 54.9°F, according to the analysis, released earlier this week by scientists from NOAA’s National Centers for Environmental Information. This temperature was the second highest for March in the 1880-2017 record, behind last year by 0.32°F. This also marks the first time the monthly temperature departure from average surpassed 1.8°F in the absence of an El Niño effect in the tropical Pacific Ocean, NOAA reported in a press release.

The year-to-date average, from January through March of this year, was 1.75°F above the 20th-century average of 54.1°F. This was the second-highest first quarter of the year on record, behind 2016 by 0.32°F. 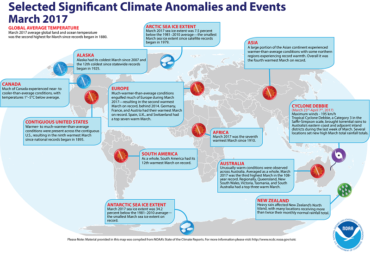 Other notable climate events and facts around the world last month included: