As shrinking arctic ice opens up of new shipping routes through Canada’s Arctic Archipelago, this presents challenges for risk managers and insurers, Allianz Global Corporate and Specialty suggests in a report scheduled for release Wednesday.

“Arctic ice has been thinning and retreating over the past 40 years, bringing new opportunities for shipping, but also serious environmental concerns,” Munich-based AGCS stated in the report, Safety and Shipping Review. A NASA article published last month observes that Arctic sea ice has been declining both during the growing and melting seasons in recent decades.

“Climate change could open up new shipping routes in the Arctic, such as the Northwest Passage,” stated Volker Dierks, head of marine hull underwriting, AGCS Central and Eastern Europe, referring to the route through Canada’s Arctic Archipelago. 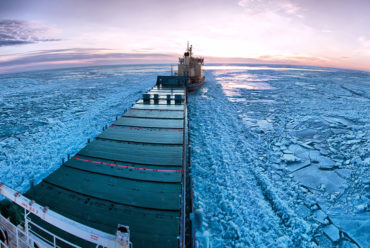 New shipping routes across Canada and Russia will have both advantages and disadvantages, Dierks wrote in AGCS’s Safety and Shipping Review. “For example, a collision in remote hostile environment like the Arctic could prove challenging, and would be a long way away from salvage teams.”

Both hull and protection and indemnity insurers have “a host of safety and navigational concerns” about shipping through arctic routes, noted Marcus Baker, marine practice leader for Marsh Inc., in an earlier report.

Risks include “the lack of help should a problem occur” because the arctic is so remote, Baker noted in Shipping: Navigating the Risks and Opportunities.

“Pollution is of great concern,” Baker added in the Marsh report, because oil reacts differently in cold temperatures. Oil is less reactive with chemical dispersals in colder water and is also likely to become trapped in or underneath the ice, making it really difficult to locate. Other risks of shipping in arctic waters include the effect of freezing water on the mechanics of the ship and fog.

“Human error continues to be a major driver of incidents,” AGCS warned. “Captains and crews are under increasing commercial pressure as supply chains are streamlined. Tight schedules can have a detrimental effect on safety culture and decision-making, leading to the ‘normalization of risk.’”