HALIFAX – An Environment Canada climatologist is warning that a dry spell in Nova Scotia that has left some people without water is just a “dress rehearsal” for the kind of weather conditions Canada can expect in the years to come. 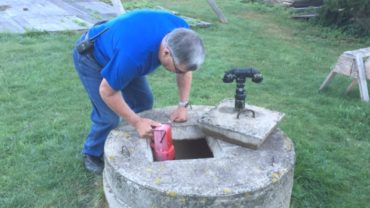 “These are little teasers, little dress rehearsals of what we’re going to be challenged with more in the future,” said Environment Canada’s David Phillips. “It’s not your grandparent’s weather anymore. It’s a new weather and weird, wild and wacky.”

Phillips said parts of Nova Scotia have been drier than normal this summer, with the Halifax area only receiving about two thirds of what it normally does in precipitation.

He said as temperatures warm up across the country over the next number of years, Canadians can expect more dry spells – and more frequently than normal.

“Don’t think that this was a one-off,” said Phillips, adding that Canadians should also expect the unexpected, as dry spells could be followed by flood conditions.

“What we need to do is learn from this and figure out how we build resilience and cushion the blow, because you can’t stop the weather.”

For farmers, that could include monitoring forecasts and planting different seeds that require less precipitation, he said. Phillips said some may consider digging deeper wells.

Officials in Nova Scotia are delivering water to residents of southwestern Nova Scotia that haven’t seen rain in weeks and aren’t expecting any for the next couple of weeks.

“We need rain,” said Municipal Affairs Minister Zach Churchill after a cabinet meeting in Halifax. “In order to fix the situation, we need about half a foot of rain to bring the water table up to a place where these wells will be able to hold water.”

Churchill said bottled water is being delivered to the most affected areas, with water stations at schools and provincial parks being opened for people to shower.

He said the communities of Argyle, Shelburne and Barrington are experiencing the most acute shortages, but there have reports of dwindling supplies in Chester and Guysborough County.

“This is a first, according to the records of Environment Canada,” said Churchill. “We have never had a dry spell like this in this part of the country.”

Churchill said water is being provided by municipal water sources and volunteer fire departments, along with ground search and rescue crews who are helping identify people who might be without water.