The landmark Paris agreement on climate change will enter into force on Nov. 4, after a coalition of the world’s largest polluters and small island nations threatened by rising seas pushed it past a key threshold on Wednesday. 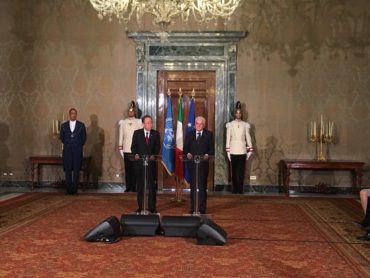 President Barack Obama hailed the news as “a turning point for our planet,” and U.N. Secretary-General Ban Ki-moon called the agreement’s strong international support a “testament for the urgency of action.” Katharine Hayhoe, a climate scientist at Texas Tech, called it: “A moment of bright hope in the increasingly discouraging landscape of climate science.”

U.N. deputy spokesman Farhan Haq said late Wednesday that the European Union and 10 countries deposited their instruments of ratification on Wednesday. The percentage of emissions they account for topped the 55 per cent threshold needed for the treaty to take effect, he said.

The deal takes effect 30 days after 55 countries, accounting for at least 55 per cent of global emissions, have adopted it. Sixty-two countries had done so as of Tuesday but they accounted only for about 52 per cent of emissions.

A U.N. website said that as of Wednesday afternoon 73 of the 197 parties to the treaty, accounting for 56.87 per cent of the world’s greenhouse gas emissions, have deposited their instruments of ratification.

Obama welcomed the news with a special address in the Rose Garden.

“Today, the world meets the moment,” Obama said. “And if we follow through on the commitments that this Paris agreement embodies, history may well judge it as a turning point for our planet.”

While the targets in the agreement are not legally binding, the treaty does require countries to report on emissions and their progress on reaching the goals in the national climate plans they submitted to the U.N. The countries are also required to maintain those plans, update them every five years and to pursue measures to implement their stated goals.

“It’s clearly a momentous moment in terms of global action on climate change,” said David Waskow, international climate director at World Resources Institute. “This has been much more rapid than anticipated and demonstrates political support for the agreement.”

The accord, which was adopted by consensus on Dec. 12, 2015, has entered into force at what is considered record speed for international diplomacy, reflecting a sense of urgency in the fight against global warming and a desire to seal the deal before Ban and Obama leave office.

International momentum had been building to ensure that the deal could enter force before the next U.N. climate conference, which starts Nov. 7 in Marrakech, Morocco.

Morocco’s Ambassador of Multilateral Negotiations Aziz Mekouar said with the treaty entering into force Marrakech will now host the first Conference of Parties to the Paris agreement.

Michael Oppenheimer, a professor of geosciences at Princeton University, warned, however, that there’s still a long road ahead.

“There’s a lot of hard work ahead to fulfil the main Paris goal, avoiding dangerous climate change. Without focused efforts starting now, we are not going to avoid falling over a very steep cliff,” Oppenheimer said in an email.