Insurance flood claims have a much broader societal impact than on just the property and casualty insurance industry alone — which is another reason why it is critical to start adopting flood mitigation and prevention measures now, a climate expert told a recent conference.

The effects of a flood claim can also be seen in the life and health sectors, financial and mental health services, according to Kathryn Bakos, director of climate finance and science at the Intact Centre on Climate Adaptation at the University of Waterloo. She spoke Tuesday at the Insurance-Canada.ca Technology Conference in Toronto.

“Fifty per cent of Canadians are living paycheque-to-paycheque,” she said. “So we’re no longer just talking about the financial cost in regards to insurance. We’re talking about the instability and uninsurability of the Canadian housing market.” 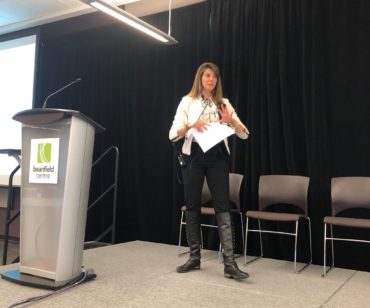 Kathryn Bakos, director of climate finance and science at the Intact Centre on Climate Adaptation at the University of Waterloo, speaks at the Insurance-Canada.ca Technology Conference in Toronto on Feb. 25.

Next, add in the toll on a flood victim’s mental and physical health. Bakos told the story of how the team at the Intact Centre wanted to survey homeowners in 2017, three years after a localized flooding event that affected 3,500 homes in Burlington, Ont. The researchers went to see 100 of the affected homeowners and compared their experiences with those who were unaffected.

What was meant to be five-minute surveys at the front door instead turned into half-hour “therapy sessions” that saw homeowners bring the researchers into their house to show where damage took place and photos of the flood, Bakos said. “People were so emotionally involved with what happened. Remember, this was three years later.”

The purpose of the survey was to find out the homeowners’ stress levels when a rain event occurs. Nearly half said they felt a stress level of 4.5-5 out of five in those situations. “They run into their basement three or four times. They can’t sleep. They’re extremely stressed out,” Bakos said.

People were also missing, on average, seven days of work because of flooding issues, which was 10 times higher than those who weren’t affected by the floods.

“So now we’re looking at lost time from work,” she pointed out, adding that psycho-social stressors lead to increased medication usage. “This is not to do with the P&C sector. These are now to do with the life and health insurers, who may have thought, ‘We’re immune to climate change.’ Now what they’re seeing is, they’re not.”