Wondering what your city’s climate will be like in a few decades?

That’s the average distance between 540 cities in the United States and Canada and the nearest city that now has the climate that they could expect, says co-author Matt Fitzpatrick of the University of Maryland’s Center for Environmental Science. 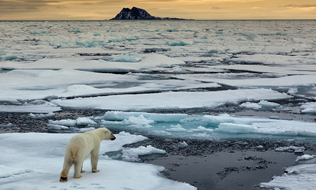 “The basic question we wanted to answer is, what is Toronto or Edmonton going to feel like if some of these forecasts come to pass as we expect them to?” said Fitzpatrick.

“That never resonated with me,” said Fitzpatrick.

“I work with these data all the time, but I’ve no idea of what does that actually mean for the place that I live. How’s my climate going to change?

“This was an attempt to answer that question.”

Fitzpatrick’s cities represent about 250 million people. That’s more than three-quarters of the U.S. population and more than half of Canada’s.

For each city, he used 27 climate models to determine what its climate is likely to be by 2080. He used both a business-as-usual scenario and one in which emissions are reduced.

He then looked for a community which now has temperature, rainfall and variability most closely matching that future climate.

If nothing changes, he found, Montreal could have the climate of Chester, Penn. Calgary could be like Spearhead, N.D.

Fitzpatrick acknowledges the comparisons are simplistic. For example, they don’t account for extreme weather events, which are expected to be one of the main features of climate change.

“We’re having to ignore complexities of increased frequency and magnitude of extreme events.”

Fitzpatrick added that many of the comparisons are not exactly exact, especially under the business-as-usual scenario.

“For many urban areas,” he writes, “we found substantial differences between future climate and the best contemporary climatic analog, underscoring that by the 2080s many cities could experience novel climates with no modern equivalent.”

Vancouver was the Canadian city which had the most approximate match. Calgary’s was the most exact.

The approach, which has been used in Europe and in conservation planning, still has powerful communication value, Fitzpatrick said.

And seeing the distance on a map is a powerful representation of the magnitude of coming changes.

“In general, it hit home to me the dramatic transformation in climate that children living today are going to experience,” Fitzpatrick said.

“By the time I have grandchildren, if they live in the same place I live now, they wouldn’t recognize the climate I live in today. It’s going to be like a story from the past.”