“In the past four years, in my focus line, you’ve literally seen excess liability dry up as it relates to commercial auto, especially if there is a cross-border exposure,” said Angelique Magi, national vice president of transportation and strategic initiatives with The Guarantee Company of North America. “We all know why that is: that adverse development that happens five or 10 years out because of U.S. litigation and then that comes forward and hits companies on their bottom line.” 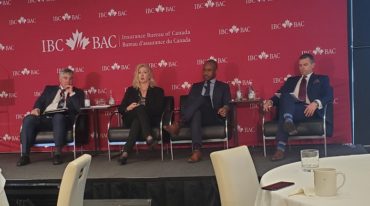 Angelique Magi (second from left), speaks about some of the emerging issues in the commercial market, alongside (l-r) James Giffen, Jonathan Weekes and moderator David Yeatman.

Magi was speaking as part of the panel, The Emerging Issues Facing the Commercial Market. She was responding to a question about issues on the horizon regarding specialty lines from moderator David Yeatman, senior vice president, Canadian marketing and communications manager with Chubb Insurance Company of Canada.

“You’ve got this mountain of inability to get access to that particular capital to be able to emerge into different lines, like cyber,” Magi added.

Yeatman also asked about some of the economic factors in the space. The biggest one as it relates to transportation, whether that’s rail, marine or trucking, is probably the ongoing trade discussion, Magi said. She added that trucking is probably “the most volatile out of the specialty auto that we deal with because of the cross-border exposure.”

Social inflation – rising costs of claims that are a result of societal trends and views toward increased litigation, larger jury awards and such – is also playing a role. “We are seeing it happen in Ontario,” Magi said. “Even what we used to think from a liability perspective, oh, it’s only a $15,000 loss, now they are coming in at $50,000 or $150,000.”

The ongoing “war for talent” in the industry, doesn’t help the situation. “We have a bit of a talent crunch in our industry period, but especially in specialty.”

Don Forgeron, IBC’s president and CEO, said during the symposium’s opening remarks that the growing challenge in the commercial space is also a political one. 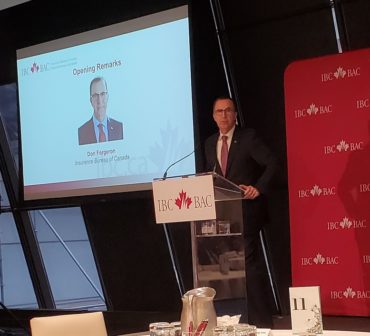 Certain businesses, like trucking companies and condominium corporations, are having trouble finding and keeping adequate insurance. “Some might be tempted to say, ‘It’s nothing to worry about, that it’ll all sort itself out, the market will handle it, it’s just the way the marketplace works.’ Being an unregulated segment of the industry, that has been our mantra for many years,” Forgeron said.

But a world in which certain Canadian businesses can’t find or afford insurance is “politically untenable,” he said. “It just doesn’t work. Governments will not stand by and allow it to happen. Policymakers will quickly conclude if the insurance industry can’t get its act together, we’ll have to step in and fix it things for them with laws, rules and regulations. This is a point worth dwelling on for a moment because it has the potential to affect the business lines of every company in this room.”

In fact, the same governments industry is talking to about auto insurance reform are having voters and constituents not able to find condo insurance or having trucking companies come in to complain to ministers, Forgeron said. “So, there is a spillover and it will affects us in many, many ways if we don’t meet this challenge head on.”

There are also a number of emerging risks and challenges that will almost certainly end up on the radar screen of decision-makers, he said, using the examples of connected communities, potential liabilities related to technological vulnerabilities, and the growing frequency and cost of natural disasters in an age of climate change.

“None of us wants more regulation or government interference because none of us believes we need that,” Forgeron said. “But it’s a two-way street. The industry must always demonstrate that it is capable of meeting the needs of those who require its service. We need to keep listening and working towards solutions that work for everyone.”