It filled with several feet of gushing water, which reached the roofs of vehicles belonging to subcontractors working nearby. 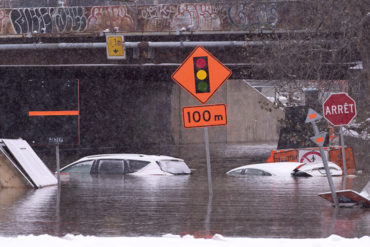 A water pipe was perforated by a natural gas company working on a tunnel under Montreal’s Lachine Canal. By Paul Chiasson, The Canadian Press

Authorities say there were no injuries, and the water did not flood any nearby homes.

Montreal Mayor Valerie Plante visited the site and warned the process of shutting the valve and pumping out the water would take several hours. She said workers from Energir, a natural gas company, broke the 60-centimetre water pipe.

Benoit Dorais, the borough mayor in the southwestern Montreal district, said it wasn’t clear how long it would take before roads leading to the tunnel could reopen.