A disputed $14.5-million claim on a course of construction policy, arising from an incident when concrete slabs over-deflected during the building of a hospital addition, was recently remanded by the Supreme Court of Canada to the British Columbia Court of Appeal. 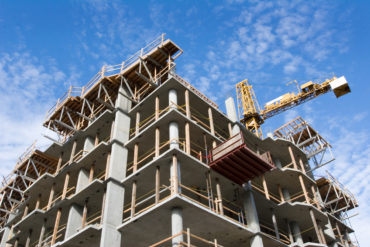 The insurers applied for leave to appeal to the Supreme Court of Canada, which announced this past Thursday it is remanding the case back to the B.C. Court of Appeal.

ALJV was formed by Acciona Infrastructure Canada Inc. and Lark Projects (2004) Ltd. to build an eight-storey addition to Royal Jubilee Hospital in Victoria.

“As the work neared completion, it was noted that certain of the slabs were over-deflecting, resulting in concave recessions in the centre of the slabs,” wrote Mr. Justice Ronald Skolrood of the Supreme Court of B.C. in a decision released, mainly against the insurers, in 2014. “Further examination disclosed ‘significant and variable deflections’ on a number of the floor levels. The supporting rebar (within the slabs) had stretched beyond its flexural yield point, resulting in permanent deformity. In addition, many of the slabs had cracked in the vicinity of the support walls and columns. While the cracks varied in width and length, many were large enough for a credit card to be inserted.”

Load tests were conducted and the slabs were repaired, causing delays for other subcontractors.

ALJV’s claim included $4.1 million in “costs directly incurred for repair of cracks, levelling and topping,” $2.06 million for cleaning and $4.05 million for increased subcontractor costs, among other things.

The B.C. Supreme Court ruled that ALJV could not recover the cost of increased subcontractor costs, but could recover $7.14 million for costs related to slap repair, $1 million in indirect costs and $350,320 in profit margin, for a total of $8.5 million.

The insurers argued that the over-deflection, cracking and bending did not constitute “direct physical loss of or damage to the property insured” within the meaning of the clause describing the perils insured.

“To accept that argument would be to deprive the Contractor of any insurance coverage for unfinished work during construction, which cannot be what the parties intended,” wrote Mr. Justice Peter Willcock, of the B.C. Court of Appeal, which upheld the B.C. Supreme Court ruling. “The Policy, a course of construction policy, was clearly intended to afford coverage for damage to property that was in a partially finished state.”

The insurers had argued that a London Engineering Group (LEG) exclusion clause applied. That clause excluded “all costs rendered necessary by defects of material workmanship, design, plan, or specification, and should damage occur to any portion of the Insured Property containing any of the said defects the cost of replacement or rectification which is hereby excluded is that cost which would have been incurred if replacement or rectification of the Insured Property had been put in hand immediately prior to the said damage.”

Meanwhile, on Sept. 16, 2016, the Supreme Court of Canada released a separate ruling in a different case – Ledcor v. Northbridge – which also involved a dispute in interpreting a faulty workmanship exclusion.

On Oct. 20, 2016, the Supreme Court of Canada ordered Allianz v. Acciona to be remanded back to the B.C. Court of Appeal for “disposition in accordance with” the Ledcor ruling.

In Ledcor, the Supreme Court of Canada restored a 2013 ruling by the Court of Queen’s Bench of Alberta.

During the summer of 2001, subcontractor Bristol Cleaning was hired to clean windows on EPCOR Tower, which at the time was nearing completion.

“At the time construction neared completion, concrete splatter, paint specs, and other construction dirt remained on the windows,” the Alberta Court of Appeal noted, adding that Bristol used “dull or inappropriate blades to scrape off the dirt,” did not properly clean the blades, used a “non uni-directional cleaning method” and failed to follow the manufacturer’s cleaning instructions.

The replacement cost of the windows was estimated at $2.5 million, wrote Mr. Justice Richard Wagner of the Supreme Court of Canada.

The policy written by Northbridge and others had an exclusion for “the cost of making good faulty workmanship, construction materials or design unless physical damage not otherwise excluded” by the policy.

In 2013, Mr. Justice Terry Clackson of the Court of Queen’s Bench of Alberta ruled that the faulty workmanship exclusion was ambiguous. He applied the contra proferentem principal, meaning the contract was read against the party that drafted the contract. This meant that the insurance policy should cover the cost of replacing the windows damaged by cleaning.

That ruling was overturned on appeal, in a decision released March 27, 2015.

“Merely because the application of the policy to particular fact situations might be tricky does not mean that there is ‘ambiguity’ in the policy wording,” wrote Mr. Justice Jean Côté, Justice Jack Watson and Mr. Justice Frans Slatter of the Alberta Court of Appeal.

In restoring Justice Clackson’s ruling, the Supreme Court of Canada found that the insurers “did not undertake to cover the ‘cost of making good faulty workmanship’, but they did promise to cover ‘physical damage [that] results’ from that ‘faulty workmanship'” Justice Wagner wrote on behalf of the majority.

In 2015, the Alberta Court of Appeal ruled that the damage to the windows was foreseeable and “presumptively not within the scope of the insurance policy” because the builder’s risk policy “is not a construction warranty agreement.”

However, the Supreme Court of Canada ruled that the policy “does not inappropriately spread risk, nor would it allow or encourage contractors to perform their work improperly or negligently. Bristol Cleaning “is precluded from receiving initial payment for its faulty work and then receiving further additional payment to repair or replace its faulty work.”