American International Group, Inc. (AIG) has reported a slight decrease in its Property Casualty combined ratio in the first quarter of 2016, down from 97.1% in Q1 2015 to 96.9% in the latest quarter.

AIG released its financial results on Monday, which include a decline in pre-tax P&C operating income to US$720 million for Q1 2016, ending March 31, from US$1.17 billion. AIG said in a statement that it attributes this decline primarily to lower net investment income. Overall, the company reported after-tax operating income of US$773 million for the first quarter of 2016, compared to US$1.7 billion in the prior-year quarter. 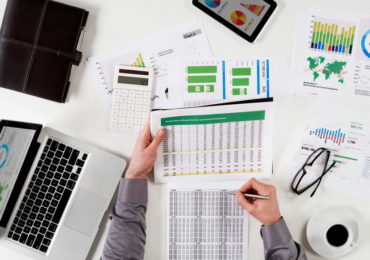 On a reported basis, AIG recognized a net loss of US$183 million for the first quarter of 2016, compared to net income of US$2.5 billion in the prior-year quarter, reflecting the impact of market volatility, as well as net realized capital losses, restructuring costs and other items.

“Although our first quarter results were impacted by market volatility on investments, the underlying operating results demonstrate progress on our strategic objectives,” said Peter D. Hancock, AIG president and chief executive officer, in the statement. “We’ve made some ambitious commitments through 2017, and our first quarter operating results show that we’re executing on our plan.” [click image below to enlarge] 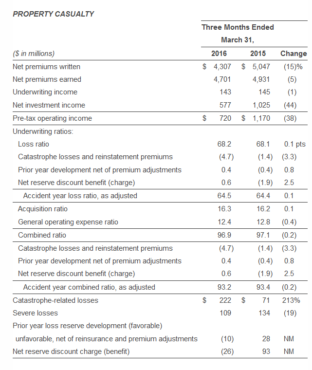 During the first quarter of 2016, AIG entered into a two-year reinsurance arrangement with the Swiss Re Group, under which a proportional share of AIG’s new and renewal U.S. Casualty portfolio is being ceded. This arrangement will reduce the impact of the U.S. Casualty loss ratio on the company’s overall loss ratio, in accordance with its strategic plan, the statement said.

For Personal Insurance, pre-tax operating income grew to US$222 million, compared to a loss in the prior-year quarter, due to improved underwriting results, partially offset by lower net investment income (reflecting lower income on alternative investments from negative performance in hedge funds), AIG reported. The combined ratio decreased 9.3 points from 103.2% in Q1 2015 to 93.9% in the latest quarter, reflecting improvements in the loss ratio and expense ratio.