Mutual property & casualty insurers in the United States experienced more growth in their commercial business than in personal lines over the past five years, while improved pricing sophistication has led to lower loss ratios, A.M. Best Company suggested in a report released Thursday. 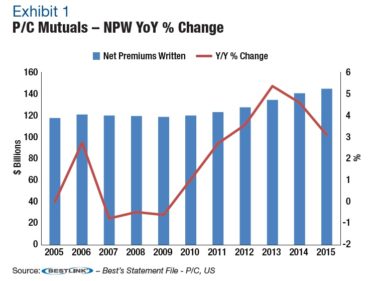 “Over the last five years, A.M. Best has seen many of the mutual carriers expanding into more of the small commercial market to stay competitive and shift away from personal lines challenges,” the Oldwick, N.J.-based ratings firm said in the A.M. Best special report, titled Mutual P/C Insurers Managing Market Challenges.

The data in the report is from 218 U.S. domiciled rating units as of Dec. 31, 2015. The report excludes risk retention groups.

State Farm Group had 41% market share, of the mutual insurers covered in the report followed by Nationwide Group with 13.1% share and American Family Insurance Group with 5.1%. All other insurers had less than 5% market share each.

“Loss ratios continue to improve and stabilize from various rate actions, improved pricing sophistication, and milder weather patterns over the last three years, while evolving enterprise risk management programs, including technological investments and higher commission expenses, coincide with the increased premium growth and address the uptick in the expense ratio,” A.M. Best said in the report.

A.M. Best also broke down the loss ratio by line and year. In 2015, for example, loss ratios ranged from 36.1% in medical professional liability to 67.5% in private passenger auto liability.

“Overall, the direct incurred loss ratio was relatively flat over the last three years through 2015, with the exception of Texas and California, which saw an increase to the direct incurred loss ratio in 2015,” A.M. Best reported. “The main contributors to the increase were the Valley and Butte fires …. which raged across California for much of September, as well as statewide wildfires in Texas in October.”