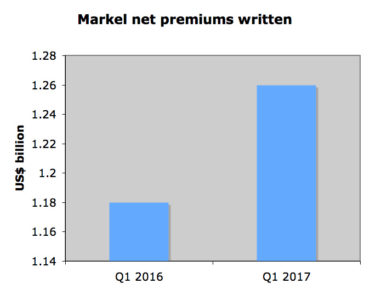 Glen Allen, Virginia-based Markel released April 26 its financial results for the first three months of 2017. Among the factors affecting its results were a recent change in the rate used in Britain to calculate lump sum awards in bodily injury cases.

“The increase in the consolidated combined ratio for the quarter ended March 31, 2017 was driven by less favorable development on prior years’ loss reserves and a higher current accident year loss ratio compared to the same period of 2016,” Markel said in a filing with the U.S. Securities and Exchange Commission.

In its annual report for 2016, released in February, Markel reported that 23% of its consolidated gross premium writings related to foreign risks. Of that nearly a third were from Britain and 11% were from Canada.

Markel’s operation in Canada, formerly known as Elliott Special Risks, has been in existence since 1966.

In Canada, Markel’s insurance offerings include marine, environmental liability, cyber, directors and officers among others. 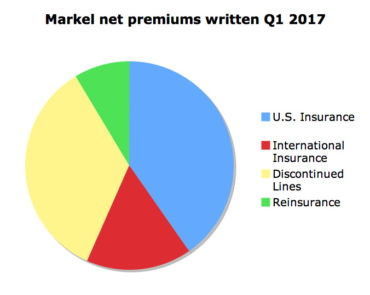 In Europe, Markel participates in the London market through Markel Capital Limited and Markel International Insurance Company Limited, both of which are based in London, England and which have offices in Canada. Markel Capital provides capital for Markel Syndicate 3000.

Broken down by segment, Markel Corp. reported a combined ratio of 88% in international insurance in Q1 2017, a seven-point improvement from 95% in the same three months of 2016. The latest quarter’s results “included $50.3 million of favorable development on prior years’ loss reserves compared to $29.7 million in 2016,” Markel said of international insurance.

In reinsurance, the combined ratio deteriorated 50 points from 82% in Q1 2016 to 132% in the latest quarter. This “included $71.6 million of adverse development on prior years’ loss reserves compared to $36.4 million of favorable development in 2016,” Markel stated. “The adverse development on prior years’ loss reserves in 2017 is primarily due to the decrease in the Ogden Rate,” Markel said, referring to the rate used to calculate lump sum awards in Britain in bodily injury cases.

“Effective March 20, 2017, the Ogden Rate decreased from plus 2.5% to minus 0.75%, which represents the first rate change since 2001,” Markel said. The effect of that change “is most impactful” to Markel’s “U.K. auto casualty exposures through reinsurance contracts written in the Reinsurance segment.”

The change in the Ogden rate “resulted in $85.0 million of adverse development, or 38 points on the Reinsurance segment combined ratio,” Markel said.