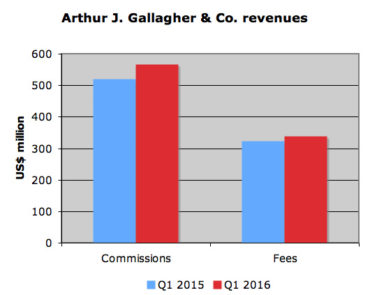 In 2015, 3% of Arthur J. Gallagher’s revenue was from Canada, the firm reported in February in its annual report. At the time, Gallagher reported it had 35 locations in Canada, where the firm places property, commercial auto, liability, business interruption and cyber, among other commercial insurance lines. Gallagher provides personal insurance to high net worth Canadians.

In 2014, Gallagher completed the purchase of a majority interest in insurance brokerage Noraxis Capital Corp. from Roins Financial Services Ltd., which owns the RSA Canada group of companies. The following year, Gallagher bought Cohen & Lord Insurance Brokers Ltd., an Ottawa-based firm whose markets include commercial realty and condominiums, construction and fleet, as well as personal lines for wealthy individuals. Other Canadian units of Gallagher include the CG&B Group and Stevenson & Hunt.

In its Q1 2016 filing with the United States Securities and Exchange Commission, Gallagher says that during the first three months of this year, it acquired “substantially all of the net assets” of several firms. Acquisitions included Kane’s Insurance Management Operations (KIM) for $30.8 million and White & Company Insurance Inc. (WCI) for $19.3 million. White & Co. is a Santa Monica, Calif. broker that places coverage “for the finance, healthcare, real estate, manufacturing and distribution, aviation and hospitality industries,” Gallagher said in an earlier release.

Gallagher had 21,500 employees as of Dec. 31. In its annual report for 2015, the firm reported it had “completed and integrated 383 acquisitions from January 1, 2002 through December 31, 2015.” Most of those were “smaller regional or local property/casualty retail or wholesale operations with a strong middle-market client focus or significant expertise” in one of Gallagher’s focus market areas.

In addition to its retail brokerage operations, Gallagher operates a risk management segment that provides claim settlement and administration services for organizations that self-insure, and to insurance providers that outsource their P&C claims departments.

Gallagher also has a 46.5% interest in Chem-Mod LLC, whose proudcts are intended  reduce mercury, sulfur dioxide and other emissions at coal-fired power plants.