“Flood insurance is still a fairly new product in the Canadian insurance market, but when offered to SGI Canada homeowners, the coverage was applied to 77% of eligible polies,” Cartmell wrote. “The efforts of SGI Canada’s broker partners ensured this important coverage will help preserve people’s homes and financial security in the event of a devastating flood loss.”

Coverage for losses from overland flood were generally not available on Canadian home insurance policies until 2015, the year that The Co-operators and Aviva announced residential flood coverage. Other home insurers have since followed suit with their own flood coverage for homeowners.

The availability of overland flood coverage has “served to add an additional layer of complexity,” wrote MSA Research Inc. CEO Joel Baker in an article in MSA’s Quarterly Outlook Report for Q1 2017, released in June.

In addition to operating the Auto Fund, which has a monopoly on compulsory auto insurance in Saskatchewan, SGI also owns 100% of SGI Canada Insurance Services Ltd. and writes property and casualty insurance – in Saskatchewan, British Columbia, Alberta, Manitoba and Ontario – in competition with private insurers. Its Ontario subsidiary is Coachman Insurance Company. 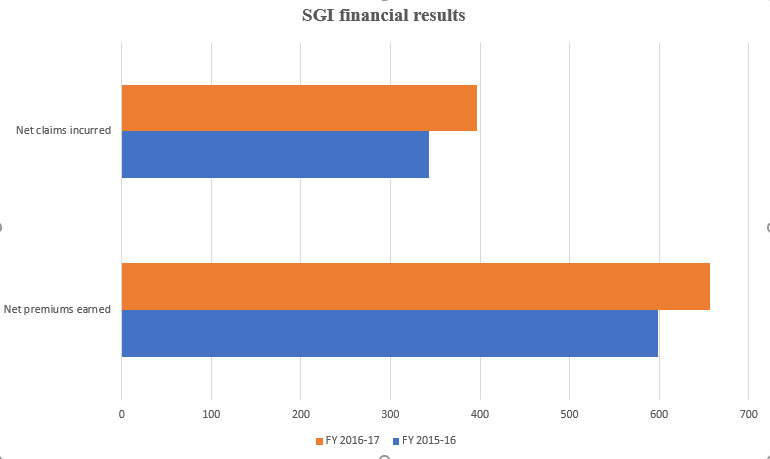 “Storm claim losses totaled $51.6 million in 2016-17, with a substantial number of claims streaming in following powerful weather events,” Cartmell wrote in the annual report. “In Saskatchewan, these included a pounding hailstorm that hit Moose Jaw and heavy rains that caused flash flooding in Estevan; and in Alberta, two significant summer storms – all in July of 2016.”