The recent wildfire in and near Fort McMurray, Alberta resulted in net incurred losses of $13.5 million for OdysseyRe and $20.9 million for Northbridge Insurance, the carriers’ parent company reported recently. All figures are in United States dollars. 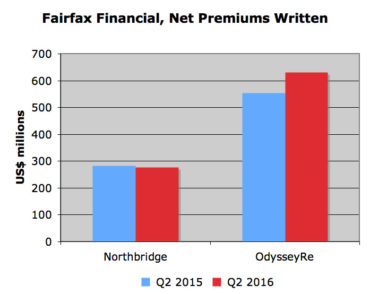 Toronto-based Fairfax’s Northbridge subsidiary had a combined ratio of 100% in the most recent quarter, up 5.5 points from 94.5% during the second quarter of 2015.

Northbridge’s underwriting results in the second quarter and first six months of 2016 included $21 million, “of current period catastrophe losses, principally comprised of the impact of the Fort McMurray wildfires.”

On July 6, Catastrophe Indices and Quantification Inc. said its estimated cost, at the time, of insured losses from the wildfires, was Cdn$3.58 billion. The wildfire, which started in early May, resulted in the evacuation of about 80,000.

The combined ratio in the latest quarter included 12.8 points of net favourable prior reserve development, “principally related to catastrophe losses,” compared to 4.8 points in Q2 2015, Fairfax said in its Q2 financial report.

OdysseyRe had 14.1 combined ratio points, or $75.3 million of current period catastrophe losses in Q2 2016, and 10.2 combined ratio points or $102 million, in the first half of the year. That was “principally comprised of flooding in France, the Fort McMurray wildfires and other attritional losses,” Fairfax reported. 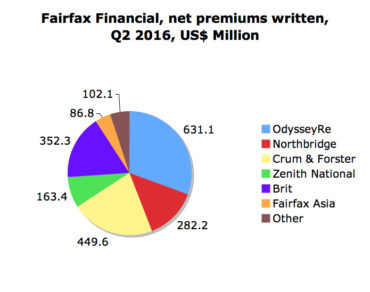 During the second quarter, OdysseyRe reported net premiums written of $631.1 million this year, up 13.9% from $554 million in 2015. That increase “primarily” reflected “the impact of the non-renewal on June 1, 2015 of a Florida property quota share reinsurance contract (following the cedent’s decision to retain all the risk associated with that contract),” Fairfax noted. Excluding the effect of that non-renewal, OdysseyRe’s Q2 net premiums written increased were up 2.4% year over year, “principally reflecting growth in the crop line of business in the U.S insurance division, partially offset be decreases in the Latin America division.”

In 2015, a Fairfax subsidiary completed the acquisition of the general insurance business of Malaysian carrier MCIS Insurance Berhad.