Hurricanes, earthquakes contribute to Group 9M net loss of US$468 million for Swiss Re

Swiss Re has reported a Group net loss of US$468 million for the first nine months of 2017, reflecting the US$3.6 billion expected insurance claims from Hurricanes Harvey, Irma and Maria, and the Mexico earthquakes. 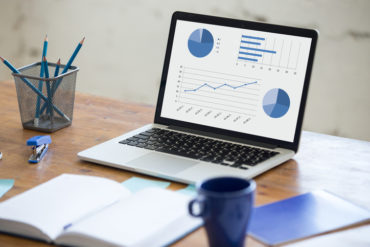 Property & Casualty Reinsurance’s and Corporate Solutions’ results were both affected by these severe events, with P&C Re reporting a US$652 million net loss and Corporate Solutions a US$762 million net loss. Life and Health Reinsurance “continued to generate strong results,” with a net income of US$741 million, while Life Capital’s gross cash generation was US$789 (net income of US$152 million), Swiss Re said in a statement on Thursday.

“The severe natural catastrophes we have experienced so far this year have clearly impacted our results,” said Swiss Re’s Group chief executive officer, Christian Mumenthaler. “At the same time, we are able to absorb these losses and join forces with our clients to help affected people and businesses in getting back on their feet. We believe we have the financial strength to respond to potential market developments and we continue to stay committed to creating long-term shareholder value.”

The US$468 million net loss compared to a net income of US$3 billion for the same period in 2016. “The decline was primarily driven by the previously communicated expected insurance claims in the aftermath of the recent Atlantic hurricanes, the earthquakes in Mexico as well as Cyclone Debbie in Australia and floods in Peru in the first half of the year,” the statement noted. Overall, Swiss Re expects its insurance claims from nat cats for the first nine months of 2017 to amount to approximately US$4 billion at a Group level, with around US$3 billion being incurred by P&C Re and approximately US$1 billion by Corporate Solutions.

Related: Swiss Re estimates losses from recent hurricanes, Mexico earthquakes at US$3.6 billion

Gross premiums written (GWP) for the first nine-month period declined 5.1% to US$26.7 billion, as “Swiss Re applied its disciplined underwriting approach in challenging market conditions.”  In addition, as a result of the large nat cat losses, the Group has strengthened Corporate Solutions’ capital position with a US$1 billion capital injection.

Expected combined claims of US$3 billion from this year’s large nat cat losses led to a strong decline in P&C Re’s results, the statement reiterated. P&C Re expects losses from Hurricanes Harvey, Irma, Maria, and the Mexican earthquakes to amount to US$2.65 billion. The sector’s combined ratio increased to 114.1% from 93.8% in 9M 2016, as the impact from large nat cat losses was well above expected levels for these nine months. P&C Re continued to experience positive prior-year development during the first nine months of 2017, the statement added. GWP declined 12.6% to US$13.4 billion in 9M 2017. 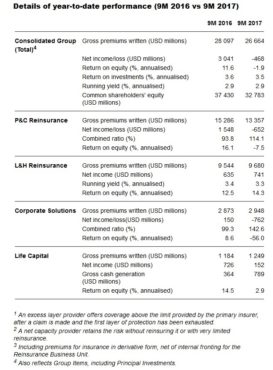 “The entire re/insurance industry is now required to demonstrate its critical role and responsibility subsequent to the tragic natural catastrophes of the recent months. In my view, many lines of business have been operating in an unsustainable environment,” Mumenthaler said in the statement. “We expect pricing conditions to improve going forward – not only in reinsurance but also in commercial insurance. In addition, we are strongly positioned to work with our partners to capture market opportunities when they arise – as they often do after such events – and continue to tackle protection gaps around the world.”

Founded in Zurich in 1863, the Swiss Re Group is a leading wholesale provider of reinsurance, insurance and other insurance-based forms of risk transfer. Dealing direct and working through brokers, its global client base consists of insurance companies, mid-to-large-sized corporations and public sector clients.