There is a “growing interest” among Canadian property and casualty insurers in the United States market, while on this side of the border, Aviva plc has became the Number 2 P&C insurer in Canada and the loss ratio in Canadian commercial P&C deteriorated 14.3 points in 2016, A.M. Best Company Inc. suggested in a report released Thursday. 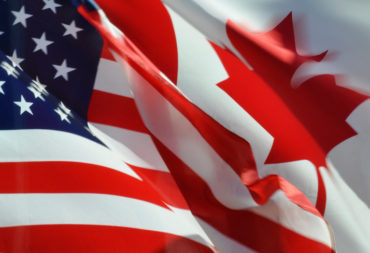 Over the past 18 months, “Canadian investment in the U.S. market, either directly (i.e., by acquiring a U.S. operation or creating a new entity) or indirectly (i.e., by acquiring an international organization with significant operations in the U.S.), exceeded the level of investment in previous years,” Oldwick, N.J.-based A.M. Best said in its report on the Canadian industry. “Most notably, Intact’s announced acquisition of OneBeacon was driven by Intact’s explicit intent to expand into the U.S. market.”

Another Canadian-based firm expanding into the U.S. is SCM Insurance Services Inc., which announced in 2016 it is opening a Chicago office and announced May 3, 2017 that it is acquiring St. Louis-based claims adjuster Nixon & Company Inc. SCM companies include, among others, data vendor Opta, engineering services provider Pario, investigations provider Xpera and independent adjusting firm ClaimsPro. SCM announced Aug. 31 it is receiving funding (without disclosing the amount or details) from private equity firm Warburg Pincus LLC. In 2014, SCM acquired the P&C business of Granite Global Solutions, which in turn owned Granite Claims Solutions, previously known as McLarens Canada and before that as Ponton Coleshill Edwards & Associates.

An acquisition of OneBeacon “will allow Intact to leverage the combined companies’ specialty lines experience while improving opportunities for additional scale in existing markets,” A.M. Best said in its report. 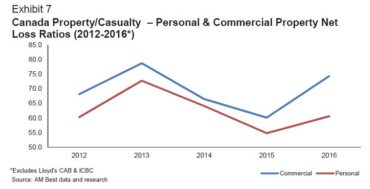 In the Canadian P&C market, consolidation has “remained strong, with scale, diversification, and expertise among the recurring rationales for M&A,” A.M. Best said in its special report released Aug. 31.

Aviva Canada completed its acquisition of RBC General Insurance Company in 2016, leaving Toronto Dominion (TD) Bank as the only Big 6 bank that writes home and auto insurance.  Aviva now has a deal with the Royal Bank of Canada Insurance in which Aviva Canada provides policy administration and claims services.

The RBC General Insurance acquisition “presented Aviva with an opportunity to achieve additional scale and market share in Canada” and “solidified Aviva’s spot” as the second-largest P&C insurer, when measured by direct premiums written, A. M. Best said.

The four Canadian P&C carriers with the greatest market share, in order, in 2016, were Intact, Aviva, Desjardins and TD, with $8.3 billion $5.1 billion, $4.5 billion and $3.0 billion in direct premiums written each, A.M. Best reported.

The Cooperators, Wawanesa and Lloyds each had $2.8 billion in direct premiums written last year in P&C while Economical and Travelers ranked ninth and 10th with $2.1 billion and $1.5 billion respectively.