Despite losing about 2.7 billion euros on three recent North Atlantic hurricanes alone, Munich Re said Thursday it is “expecting to generate a small profit” this year. 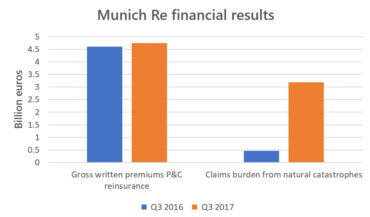 Munich Re released its financial results for the period ending Sept. 30, reporting a 1.4-billion euro loss in Q3 and a 146 million euro loss for the first nine months of the year. The euro opened Thursday at $1.48.

“As already reported on 26 October, major losses in the third quarter (after retrocession and before taxes) have had a negative impact of €3.2bn on the result,” Munich Re said.

Hurricanes Harvey, Irma and Maria made landfall Aug. 25 near Rockport, Tex., Sept. 10 at both the Florida Keys and near Tampa, and on Sept. 20 in Puerto Rico.

“Claims expenditure from these hurricanes after retrocessions and before tax is currently estimated very tentatively at a total of €2.7bn,” Munich Re stated.

Those three hurricanes “have significantly increased our forecast for the combined ratio in property-casualty reinsurance,” Munich Re added, noting the company now expects a full-year combined ratio of 112%.

Fitch Ratings Inc. said Sept. 26 it estimated catastrophe losses this year “will constitute a capital event for a number of (re)insurance companies” and not just an earnings event. 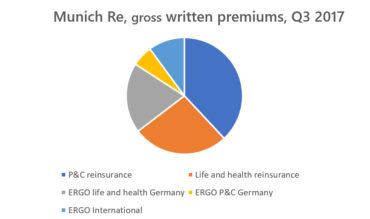 “After all the major natural catastrophes, we expect prices in the USA to increase for the renewals as at 1 January 2018,” Munich Re said Nov. 9.

Munich Re added it is “proceeding on the assumption of total insured market-wide losses in the range of US$100 billion from Hurricanes Harvey, Irma and Maria.

Munich re also made reserve releases of about 250 million euros in the most recent quarter, “which is equivalent to 6.0 percentage points of the combined ratio.”

“Our capitalisation is strong, and we are able to take full advantage of opportunities arising from the likely market recovery,” Munich Re chief financial officer Joerg Schneider said in a release. “We expect prices to rise again in the forthcoming negotiations – particularly in the markets that have been hardest hit by recent natural catastrophes.”