Canada is expected to witness a slower pick-up in business investment until a clearer picture develops on recent developments around credit conditions south of the border, including the influence of the outcome of the recent U.S. election, suggests a briefing released earlier this week by S&P Global Ratings. 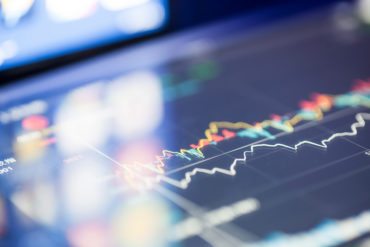 Observations in the briefing – which, among other things, identifies credit risks and their potential ratings impact in various sectors – are based on views developed during the North America Credit Conditions Committee discussion in late November.

Following the presidential election, the briefing notes, financial markets have begun to factor in a higher U.S. federal budget deficit, accelerated inflation and a stronger U.S. dollar against the backdrop of increasingly isolationist American trade policy.

“The push and pull of these forces, as well as what S&P Global Ratings sees as the top risks around the globe, may chip away at what has largely been a period of fairly favourable credit conditions in the region,” the rating agency points out.

There is “some upside potential if the new administration succeeds in substantially spurring growth in the U.S. economy,” it adds.

Developing conditions could have an impact on Canada.

If Trump follows through on his campaign vow to renegotiate NAFTA, the briefing cautions, “this could disrupt the integrated supply chains that the treaty’s partners share, potentially undermining business confidence and destabilizing investment across the free-trade zone.”

For Canada, “our expectations for a slower pick-up in business investment in part reflect the wait-and-see stance Canadian companies may adopt until a clearer picture emerges for trade prospects with the U.S.,” it explains.

Still, the thought is Canada’s economy will recover following a setback that reduced real gross domestic product (GDP) growth in the first half. “Canada’s GDP looks set to expand an average of 2.7% in the second half, led by a 3.1% gain in the third quarter.”

Against this backdrop, “the Bank of Canada’s policy rate is likely to remain at 0.5% until late 2017. This means short-term rates in Canada will lag increases in the U.S., which is likely to contribute to downward pressure on the Canadian dollar against the U.S. currency,” the briefing suggests.

The potential adoption of protectionist measures is among the factors that “raise barriers to international trade, unwind cost efficiencies from global supply chains or disrupt investment,” S&P Ratings notes.

“Anti-globalization sentiment and the potential adoption of protectionist measures that raise barriers to international trade, as well as the potential repricing of risk in the currency, equity or debt markets, are among our top global risks,” it states.

In general, “North American insurers’ credit quality remains strong. We do see some potential for negative rating actions in the bond and health sectors; conversely, we see potential for some upside rating movement in the mortgage sector,” the briefing notes.

However, rising interest rates would be of more concern to others.

“Interest rates around the world remain at or near historic lows, with some even in negative territory,” the briefing notes. “Nonetheless, how companies are positioned to adapt to rising interest rates is crucial to understanding credit risk.”

The briefing reports S&P Global Ratings recently tested the sensitivity of the more than 3,000 global corporate borrowers the firm rates to a spread shock similar to that of the 2008-2009 global financial crisis.

The analysis shows “almost one in every 10 is at risk of a downgrade in a scenario where long-term interest rates rise by just one-third in a two-year period,” it notes.

The proportion of U.S. corporates “that would be susceptible to downgrades is still a sizable 6% – and more than double that, at 13%, among speculative-grade borrowers,” the briefing states.

“Auto makers and parts suppliers could be hurt most by higher tariffs and/or changes to trade agreements – as well as any economic uncertainty that weighs on vehicle sales,” S&P Ratings explains.

If Trump follows through on his earlier pledge to impose a 35% tariff on Mexican imports, “this would cause a substantial disruption to the auto supply chain throughout North America. How efficiently manufacturers and suppliers adapt to the tariffs would depend on a number of factors, including their manufacturing footprint and the speed at which the tariffs were phased in.”

For corporates, key risks include “geopolitical instability that shakes consumer and business confidence; rising borrowing costs; a stronger dollar, which would weigh on multinationals and exporters; mergers and acquisitions, and shareholder-friendly activities, which could raise credit risk; and a cyclical downturn, which could hurt companies across the board,” the briefing notes.

“From a credit perspective, substantial deregulation could put downward pressure on bank ratings,” it points out. “Clearly, an unwinding of those limits would affect how we view industry risk,” the briefing adds.

“We believe there is a risk of policy uncertainty and potential missteps given the untested nature of the incoming Trump Administration. If these risks eventuate, there could be downward pressure on the sovereign credit rating,” it adds. 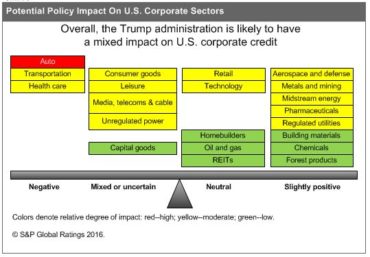 “Additionally, whether pro-growth policies foster long-term growth or simply provide a ‘sugar high’ to the economy remains to be seen. In our view, the benefits could be short-lived, as higher inflation would cut into real growth,” it adds.