Despite the recent losses to the industry from multiple North Atlantic hurricanes, The Allstate Corp. has reported underwriting income is up more than 20%, from $355 million in the third quarter of 2016 to $429 million in the three months ending Sept. 30, 2017. 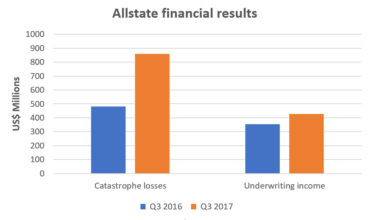 That increase is “due to higher premiums, a broad-based decline in the frequency of auto accidents and favourable prior year reserve releases,” Northbrook, Ill.-based Allstate said Nov. 1 in a release.

All figures are in United States currency.

Fitch Ratings Inc. reported Sept. 26 there are US$50 billion in “upper-end expected losses from Hurricane Irma,” to the P&C industry and US$25 billion in upper end expected losses from Hurricane Harvey. The latter made landfall Aug. 25 in Texas, causing major flooding in Houston. Hurricane Irma made two separate landfalls Sept. 10 in Florida, two days after it hit Cuba. Cities affected by major floods included Havana and Jacksonville.

The underlying combined ratio – which excludes catastrophes, prior-year reserve reestimates and amortization of purchased intangibles – improved 2.6 points, from 88% in Q3 2016 to 85.4% in the most recent quarter. 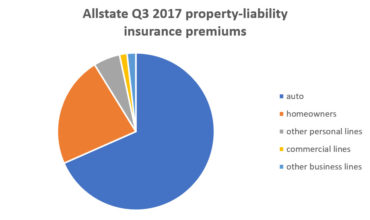 For the first nine months of the year, Allstate reported property-liability premiums of $24.1 billion this year, up from $23.4 billion in 2016.

“SquareTrade made progress on the key criteria underlying its acquisition of growing the U.S. retail business while raising margins,” Allstate stated Nov. 1, referring to the San Francisco-based company it acquired this past January.

For the first nine months of the year, net investment income increased from $2.24 billion last year to $2.49 billion this year.