Boston-based Berkshire Hathaway Specialty insurance, which announced its entry in 2015 into the Canadian market, had a 23% increase in premiums written for the first half of 2017 versus 2016, while the Berkshire Hathaway Reinsurance Group had liabilities for losses and loss adjustment expenses, associated with its retroactive reinsurance contracts, of more than $40.1 billion as of June 30, parent firm Berkshire Hathaway Inc. reported Friday.

Omaha, Neb.-based Berkshire Hathaway reported  an underwriting loss of $22 million during the three months ending June 30, compared to an underwriting gain of $337 million in Q2 2106. 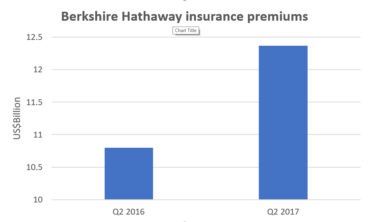 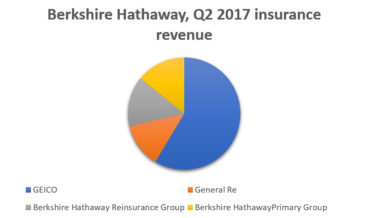 Berkshire Hathaway said earlier it received cash premiums of $10.2 billion in connection with that agreement, in which NICO assumes 80% of the net losses and net allocated loss adjustment expenses certain reserves in excess of the first $25 billion.

AIG said earlier that NICO’s overall limit of liability under the agreement is $20 billion.

“Before foreign currency gains/losses, retroactive reinsurance contracts produced pre-tax underwriting losses of $229 million and $399 million in the second quarter and first six months of 2017, respectively, and $149 million and $259 million, respectively, in the comparable 2016 periods,” Berkshire Hathaway said Aug. 4, 2017 of Berkshire Hathaway Reinsurance Group’s Q2 financial results. “The comparative increases in such losses in 2017 were primarily due to deferred charge amortization related to the AIG Agreement and another retroactive reinsurance contract written in December 2016, partly offset by a small net gain from a contract commuted in the first quarter of 2017 and comparatively lower deferred charge amortization from other contracts.”

“All of the BH Primary insurers generated increased premiums written in the first six months of 2017, led by BH Specialty (23%), GUARD (28%) and BHHC (11%),” Berkshire Hathaway said in a release.

In Canada, BH Specialty’s coverages include marine, builder’s risk and environmental liability, among others.

GEICO, General Re and the Berkshire Hathaway Primary Group reported underwriting gains, in Q2 2017, of $119 million, $25 million and $232 million respectively.