Risk and insurance revenue up 3% at Marsh & McLennan 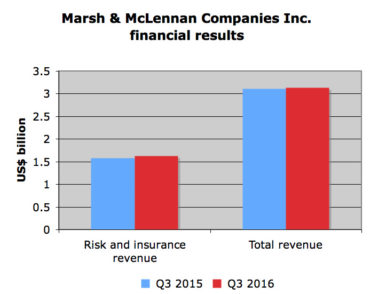 Risk and insurance revenue was $1.632 billion in the three months ending Sept. 30, compared to $1.584 billion during the same period in 2015. All figures are in United States dollars.

Marsh did not report brokerage revenue specifically from Canada. Toronto-based Marsh Canada is lead by president and CEO Chris Lay.

Within risk and insurance services, during the latest quarter, Marsh & McLennan recorded revenue of $1.364 billion (up 4% from $1.317 billion in Q3 2015) from Marsh and $260 million (essentially unchanged from $261 million in Q3 2015) from Guy Carpenter, which acts as a broker and intermediary of treaty and facultative reinsurance.

In addition to its brokerage, Marsh also provides captive services. Its practice ” operates in 42 captive domiciles” and performs captive feasibility studies and helps to structure and implement captive solutions,” Marsh & McLennan said in its SEC filing. 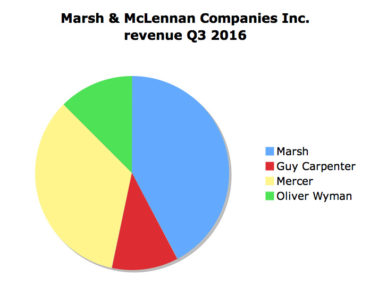 Marsh & McLennan also owns Schinnerer Group, which is “comprised of Victor O. Schinnerer & Co. in the U.S. and ENCON Group Inc. in Canada,” the firm said in its SEC filing. ENCON Group, a managing general agent, “offers professional liability and construction insurance, as well as group and retiree benefits programs and claims handling for individuals, professionals, organizations and businesses, through a national third-party distribution network of licensed insurance brokers and through benefit plan advisors.”

In addition to risk and insurance, Marsh & McLennan provides consulting through Mercer and Oliver Wyman Group.

In consulting, Marsh & McLennan reported revenue of $1.513 billion in the latest quarter, down 2% from $1.54 billion in Q3 2015. In the most recent quarter, the company reported $1.109 billion in revenue from Mercer and $404 million from Oliver Wyman.

“For the full year, we continue to expect to deliver underlying revenue growth, meaningful margin expansion and strong growth in earnings per share,” stated Dan Glaser, president and chief executive officer of Marsh & McLennan, in a release.