Economic downturn from COVID-19 will be sharpest on record, Bank of Canada warns

OTTAWA – The Bank of Canada is warning that the downturn tied to COVID-19 will be the worst on record and that the economic recovery will depend on the effectiveness of current measures to bring the pandemic under control.

The pandemic has forced companies to close and workers to stay at home as much as possible in a massive public health effort to slow the spread of COVID-19, leading to steep and sudden drops in business activity and consumer spending.

Preliminary data from Statistics Canada Wednesday showed economic activity collapsed in March as it dropped a record nine per cent.

The bank announced that it is keeping its key interest rate target on hold at 0.25 per cent, saying that it is effectively as low as it can go to combat the economic impacts of COVID-19. 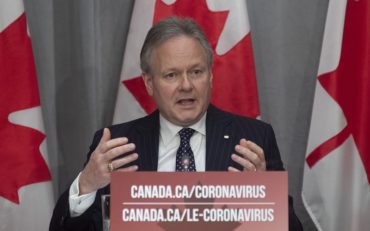 If conditions improve quickly, the economic shock is likely to be “abrupt and deep, but relatively short-lived” and followed by a strong rebound for most, but not all, sectors of the economy.

A more severe scenario would likely see a “significant number” of businesses closing for good and longer spells of unemployment as workers look for new jobs.

A longer downturn would also mean households, businesses and governments could have higher debt by the time the recovery takes hold.

No matter the scenario, all the possibilities suggest “the near-term downturn will be the sharpest on record,” the report reads.

“The outlook is highly conditional on how long the containment measures remain in place, and how households and firms adapt,” governor Stephen Poloz said in his opening remarks during a morning teleconference.

He added that “substantial monetary stimulus needed to be in place to lay the foundation for the post-containment economic recovery.”

The monetary policy report is the last one that Poloz is to be a part of with his tenure at the head of the central bank scheduled to come to a close on June 2.

He was part of the first monetary policy report published 25 years ago, summing up that he wished the circumstances for his last were “more favourable.”

This report by The Canadian Press was first published April 15, 2020.