It’s okay to cry at work. Millennials – and your CFO – are cool with it

If you are going to cry at work, make sure it’s not in front of a Boomer.

Forty-seven per cent of Canadian workers 55 and older think workplace crying has a negative effect on your professional reputation, according to a recent survey by staffing firm Accountemps.

Gen X-ers will be somewhat more forgiving of workplace tears. Only 42% of those aged 35 to 54 will think the worse of you for office waterworks.

Millennials are the least likely to judge you harshly for being teary-eyed in the workplace. Only 31% of workers 18 to 34 think workplace crying is a professional faux pas. 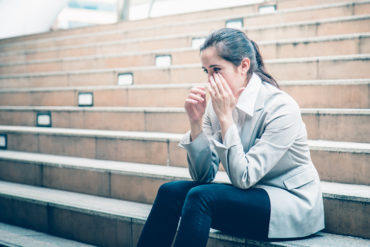 But what if that presentation before the company chief financial officer (CFOs) isn’t going at all well, and you feel the urge to reach out for a tissue? Relax, almost half (48%) of the CFOs polled said that crying at work has no negative effect on how a worker is perceived – good news for the more than four in 10 workers (42%) that have admitted to crying in the office.

In fact, survey respondents turned out to be harder on themselves for crying than their bosses were. Thirty-eight per cent of employees surveyed said crying is never acceptable at the office; only 35% of CFOs think the same.

Still, best not to break down into a blubbering heap too often. Thirty per cent of workers polled said “crying is OK from time to time, but doing it too often can undermine career prospects.” Only 9% of CFOs agreed with the same statement, making one wonder if seeing people cry is a common occurrence in their line of work.

“Occasionally getting emotional at work is understandable, but frequent upsets can damage your reputation and negatively impact co-worker relationships and productivity,” David King, Canadian president of Accountemps, said in a press release. King recommends that workers take a step back before reacting to frustrating situations. “Approaching challenges with patience and composure demonstrates your professionalism and can set you apart for career advancement or growth opportunities.”

The study was released Tuesday by Accountemps, a Robert Half company, and conducted by independent research firms. It included responses from more than 300 Canadian workers aged 18 and older who work in an office environment, and more than 270 chief financial officers (CFOs) from a stratified random sample of companies in Canada.

Accountemps offered the following five scenarios that can test even the coolest heads in the office. Included are tips for handling each with professionalism and emotional intelligence: