If a commercial client has any inklings of a toxic workplace, an independent investigation is one way of managing reputational and liability risk, an expert says.

The resignations last week of Governor General Julie Payette and her secretary may have brought the related topics of workplace harassment and employment practices liability higher on some risk managers’ radar.

For any organization, it is important to have an ombudsperson who could deal with harassment issues, said Alexandra Monkhouse, partner with Monkhouse Law Employment Lawyers, in an interview with Canadian Underwriter. Monkhouse was not commenting on any specific matter, but rather in general about what constitutes a good process by which an employee can make a formal complaint about harassment or bullying in the workplace.

An employer should have an ombudsperson available to discuss concerns with employees on a confidential basis, said Monkhouse. That ombudsperson should not disclose the names of employees who approach the ombudsperson.

In its definition of harassment, federal labour law includes comments that could “reasonably be expected to cause offence, humiliation, or other physical or psychological injury or illness to an employee.”

No formal complaints or grievances were filed by federal employees working at Rideau Hall while Payette was governor general, Payette said in her resignation speech on Jan. 21.

In July 2020, the federal Privy Council Office hired Quintet Consulting Corp. to investigate allegations of a toxic workplace within the office of the governor general, The Canadian Press reports. 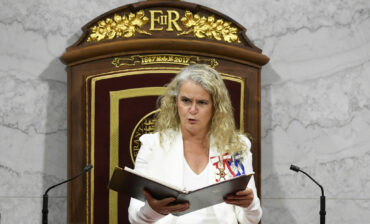 The resignations of Payette and her secretary, Assunta Di Lorenzo, came about a week after the government received Quintet’s report, CP reported. The Quintet report has not been made public.

“We all experience things differently, but we should always strive to do better, and be attentive to one another’s perceptions,” Payette said last week in a speech. An artificial intelligence expert and former astronaut, Payette was appointed to her post in 2017.

Now Canada’s temporary governor general is Chief Justice of Canada Richard Wagner, who practiced professional liability and commercial litigation law until he became a judge in 2004. Wagner was appointed to the Supreme Court of Canada in 2012 and has been Chief Justice since 2017.

As quoted by CP, Prime Minister Justin Trudeau said last week that everyone deserves a safe and healthy workplace.

When asked about risk management in general, Monkhouse told Canadian Underwriter that every workplace should have a harassment policy. Every harassment policy should ensure the employees do not have to bring their complaint to their direct supervisor if that supervisor is the person against whom the employee is lodging the complaint, said Monkhouse.

“The best step for a risk manager may be to start the process early and address the concerns as early as possible through an independent investigation,” said Monkhouse.

Large organizations often have an ombudsperson who is tasked with listening to concerns from staff about the workplace environment, said Monkhouse. For a small organization, however, it may not be practical to have a dedicated harassment ombudsperson on the payroll, she noted. But a small business could contract out an ombudsperson service so that someone is available to hear concerns from employees on a confidential basis.

Many workplaces are regulated by provincial rather than federal labour laws.

Industries whose workplaces are federally-regulated include banks, airlines, telecommunications firms and railways.