Why recruitment experts say brokers need to change their image

“People who don’t work in the insurance industry have a distorted view of what it’s like to be in insurance sales,” said Peter Morris, president of Robertson Morris Consulting.

“They think that in order to be good at sales you have to be that back-slapping, ‘Sign here’ type of person and that’s just not true. I think to the extent that we can communicate that it can be very rewarding, satisfying work – I think to the extent that we can get that message out, it would be so much easier to bring people in,” Morris said during Recruiting Top Talent & Managing the Future Workforce, a panel discussion at Canadian Underwriter’s recent Top Broker Summit. 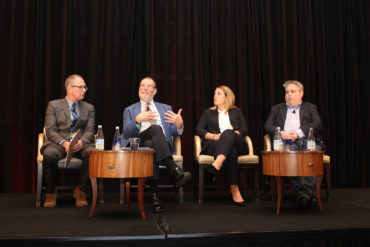 “Just the images of the industry for recruits – I think we can do a better job,” said Morris, whose services include advising brokerages on recruiting and mergers and acquisitions.

“There isn’t enough experienced talent to fill your needs,” said co-panelist Trevor Buttrum, manager of Career Connections at the Insurance Institute of Canada.

The inflow of young workers into the property and casualty insurance industry remains weak relative to the expected outflow of older workers, the Conference Board of Canada said in Demographics of the P&C Insurance Industry in Canada, a report commissioned by the Insurance Institute of Canada.

As more workers in the Baby Boom generation (who were born between 1946 and 1967) retire, competition for labour will increase, the Conference Board said in the report, which was based on a survey of employees and HR professionals as well as an analysis of data from 48 organizations employing about 35% of the industry’s workers in 2017.

Brokerages tend to be small and sales can be financially rewarding, said Morris.

“I can be close to home. That idea of Toronto – not having to face the commute can be quite an advantage.”

The industry needs to do a better job of getting the word out to young people that roles in brokerages include providing expert advice, said Kristin Coulombe, senior vice president of human resources at brokerage firm Navacord.

Tell young people they have a potential of earning high income if they can build long-lasting relationships with clients by advising them on how to mitigate risk, suggested Coulombe.

“There is an array of service levels that you can have on the operations side of the business from servicing the accounts to leadership,” she said.

“This might be for larger brokerages, but more and more, you are also seeing IT, HR, marketing – so those are the types of roles that are traditional in brokerages. Some of the things I see emerging with new roles in brokerages are content marketers, brand ambassadors, social media managers –  a greater emphasis on talent acquisition specialists,” said Coulombe.

Top Broker Summit was held Nov. 25 at the Ritz-Carlton across the road from Toronto’s Roy Thomson Hall.