Will the need for social interaction make the hybrid office a passing fad?

While many Canadian employees wish to return to a hybrid office — some adamantly so, according to a recent survey by human resources firm Robert Half — some believe the “fear of missing out” on the opportunity to socialize with colleagues in the workplace may make the future office look a lot more like the pre-pandemic office.

Andy Cohen, co-CEO for Gensler, a global architecture, design, and planning firm, recently wrote about the results of Gensler’s U.S. Work From Home Survey 2020, an anonymous study conducted online with more than 2,300 U.S.-based workers who were full-time employees of a company of more than 100 people.

The results of the Gensler survey contrast notably with other studies that suggests a majority of employees would prefer to work from home at least one or more days a week upon a return to the office.

For example, in an online survey of more than 1,100 P&C professionals conducted by Canadian Underwriter in January 2021, 72% of respondents said they preferred working from home. Eighty-one per cent called for their employers to offer more flex time to work from home after the pandemic is over. 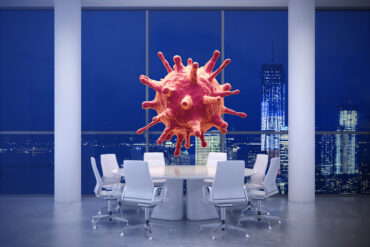 Canadian Underwriter‘s survey pinpointed a similar finding in the Gensler study: Citing the importance of social interaction, 40% of P&C professionals reported some degree of enthusiasm for seeing their colleagues and peers once it’s safe to return to the office.

Cohen believes this fear of missing out on social interactions at the workplace could ultimately drive colleagues back to the office more often than we might think.

“With many colleagues getting back into the workplace, remote employees are experiencing a new kind of FOMO—the fear of missing out on useful updates, critical intel, and key connections,” Cohen wrote in an article on LinkedIn. “Information shared in person contains rich layers of nuance and context that simply cannot be conveyed through a computer screen. People want and need face-to-face interaction to excel at their jobs.”

In support of its findings, the Gensler Research Institute notes that people are missing their in-person workplace relationships. The study contends that the workplace is where people form diverse relationships across races, ethnicities, and generations.

And so, will the draw of our colleagues be enough to draw everyone back into the old normal? Is the hybrid model of work, in which employees divide their time between working from home and in the office, a passing fad?

“Will there be enough remote work to go around after the dust settles and employers decide that they wish to recall employees to the office? The answer will probably be ‘no’ in many cases,” Hiscocks told BNN Bloomberg in an email. “Many employers should be – and are – considering these matters and balancing the pros and cons of whether to require staff to return to the office full-time – including giving due consideration to the ‘flight risk’ of losing valuable staff.”

The flight risk is real, according to a recent survey of U.S. employees conducted by the human resources firm Robert Half.

“About one in three professionals (34%) currently working from home due to the pandemic would look for a new job if required to be in the office full-time,” Robert Half said of its survey results.

The online survey was developed by Robert Half and conducted by an independent research firm from Mar. 9-16, 2021. It includes responses from more than 1,000 workers 18 years of age or older at companies in the United States.

“After a year of drastic change, many business leaders are eager to restore a sense of normalcy and welcome staff back to the office,” Paul McDonald, senior executive director at Robert Half, commented on the survey results. “But reopening doors will bring new obstacles for companies to navigate. Not all employees will be ready — or willing — to return to the workplace, so staying flexible and responsive to their needs will be critical.

“Regardless of timing, companies should take a measured and carefully planned office re-entry approach and keep employees’ health and safety top of mind. Leaders should also use the opportunity to solicit staff feedback to shape corporate culture for the future.”

More News
Related
What would a hybrid workplace even look like?