Canada’s legalization of recreational cannabis continues to raise a question for auto insurers everywhere: Is cannabis an intoxicating substance similar to alcohol? If so, how should insurers address this risk to promote safety on Canadian roads? Driving under the influence of cannabis remains “impaired driving” under the Criminal Code.

Research from the Canadian Centre of Substance Use and Addiction shows that cannabis use doubles the risk of being involved in an automobile collision. The same research shows drivers on cannabis are less able to:
• track moving objects
• respond to more than one source of information
• respond to sudden changes in a driving environment.

A charge for impaired driving due to cannabis use under the Criminal Code will likely be a significant fact in proving a driver was “impaired” or “intoxicated” at the time of an accident. However, jurisprudence suggests that a criminal conviction or an illegal level of an intoxicating substance will not be enough to conclude that an individual is under the influence of alcohol/drugs. Rather, incapacity must be established by the insurer on a balance of probabilities, often with circumstantial evidence. 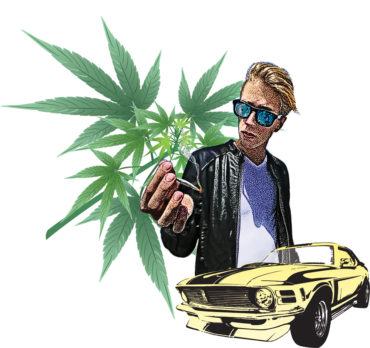 In the context of insurance coverage, the Supreme Court of British Columbia in 2015 debated what constitutes an “intoxicating substance” in Venkataya v. Insurance Corporation of British Columbia. In Venkataya, the Insurance Corporation of B.C., the province’s public insurer, denied coverage for total vehicle loss following a single-vehicle accident. The insurer contended that the claimant was under the influence of an intoxicating substance that rendered him incapable of controlling his vehicle, and/or that he willfully provided a false statement on a proof of loss. The driver stated he “had not taken any drugs or alcohol in the 12 hours preceding the accident.”

Mohammed Yusuf Venkataya was driving home in Surrey-Delta, B.C., after consuming one bowl of Kava – a traditional drink from Fiji with sedative properties – but no alcohol or drugs whatsoever. Police officers witnessed him driving erratically, crossing several lanes with traffic barriers, before eventually crashing.

Kava use was legal in Canada at the time. However, the insurer alleged Kava consumption on the night of the loss had intoxicating effects on the insured driver, which led to the loss.
The court ultimately disagreed with the insurer’s position regarding the intoxicating effects of Kava. Supreme Court of B.C. Justice Peter G. Voith ruled that the science was “thin” and did not align with the police eyewitness testimony regarding Venkataya’s behaviours and condition on the night of the accident.

The court also considered the issue of whether Venkataya had made a wilfully false statement material to his claim when he denied to his insurance adjuster that he had used drugs, “prescription or otherwise,” before driving that night; he signed a statement to that effect. The court concluded Venkataya had not made a false statement, given that he was truthful and credible surrounding all other aspects of his claim; also, he could not be faulted for having overlooked the significance of the language “or otherwise” as it related to his consumption of Kava that night. The court ordered the insurer to pay for the vehicle and costs.

Considerations for insurers
Luckily for insurers, cannabis is not Kava. There is a framework for prosecution of cannabis-impaired driving in Canada; there is also a significantly larger and more reputable body of scientific research into the effect consumption of cannabis has on a driver’s abilities behind the wheel.
However, significant difficulties remain in identifying the level of impairment of an individual who has used cannabis before getting behind the wheel. Roadside drug tests are complicated by the fact that cannabis stays in the blood for 30 days. Moreover, with cannabis, individuals may not appear “impaired” in the ways they would on alcohol or other drugs.
What have we learned from Ventakaya?
When taking statements in a case in which impairment might be a factor, using the term “prescription medications” may capture the use of medical cannabis, but it is important to specifically reference recreational cannabis as a substance consumed in the 24 hours prior to the occurrence of the loss. Questions should elicit specific answers, such as the format in which it was consumed and the strain taken.
Additionally, if insurers must decide whether to deny coverage in a situation similar to Venkataya’s, they will need to prove that the use of cannabis had the effect of an “intoxicating substance,” thus rendering an individual unable to control their vehicle. Insurers should ensure that brokers and adjusters understand the potential for cannabis-fueled impairment.

Chloe Mathioudakis is a Calgary-based dispute resolution lawyer at Field Law.
Erika Carrasco leads the Emerging Technology team at Field Law. Her areas of practice include the insurance, construction and energy sectors.