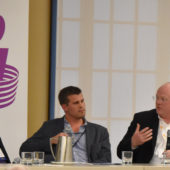 Attendees gathered in Toronto in early March to find out what is — and what should be – on the minds of brokers. Technology was central to discussions at the broker forum, the theme of which was Disruption: New Realities, New Opportunities.

Learning is a life-long process not only for humans, but for online chatbots, Amanda Ketelaars, operations manager for Mitchell & Whale Insurance Brokers, suggested in sharing her brokerage’s recent experience during the Insurance-Canada.ca Broker Forum.

Powered by rules and a form of artificial intelligence called natural language processing, which seeks to understand the intent of a question, the brokerage’s English-language chatbot can, among other things, provide an insurance quote, take a claim, set up a call and take a change request, Ketelaars reported.

The Insurance-Canada.ca Broker Forum was held Feb. 28 2017 at the Allstream Centre in Toronto

“Each conversation is giving the chatbot some chance to learn,” she pointed out during the session, Chatting it up with Customers. Unlike humans, though, the chatbot can manage several conversations at once and provide quick responses, she told forum attendees.

That said, not every conversation is spot-on.

Using the example of a client who referred to right-hand drive vehicles by asking, “Do you insure RHD vehicles?” The bot realized the person was asking for an auto quote, but did not understand it was a specialty vehicle.

However, “the bot is going to learn that. Next time, the bot will respond with, ‘We will get you a specialty quote.'”

Of course, the bot is not alone. At her brokerage, during normal business hours, there is “someone watching who can jump in if it’s going south.”

In the first month of using the bot, Ketelaars reported, the brokerage saw more than 51,000 messages through the chatbot, with each chat consisting of an estimated 20 to 30 messages.

Broken down, 70% of those messages during the 30-day period were for quotes, 20% were for frequently asked questions and 10% were for policy changes, she said. In all, 65% of the calls were during business hours and 35% were after business hours.

If an insurer can offer brokers more products, assistance and its brand is recognized by clients, “there is some value there,” Jeff Roy, chief executive officer of Excalibur Insurance Group, noted during the broker forum.

Roy was discussing the contentious decision in January in which the Insurance Brokers Association of Ontario (IBAO) announced that it was formally suspending its sponsorship partnership with Aviva Canada “for the foreseeable future.”

“Aviva continues to leverage the Aviva brand for broker-distributed products and direct-to-consumer products, with an inconsistency around product availability and pricing, a strategy the IBAO believes promotes confusion for consumers,” IBAO chief executive officer Colin Simpson said at the time.

But Roy suggested during the panel discussion, Distribution in the InsurTech Age, that with the Aviva Canada direct name, there is a “bigger play” if the insurer does offer more products and the brand is recognized.

If “you’re going to help me and that brand is recognized by my clients, there is some value there,” he suggested. “It is a murky thing, but as long as they give us a competitive price as a broker [and] give us the same tools, too, I think they can do it,” Roy told attendees.

“I struggle with it just like everybody else,” he said. But “to put the company that has helped you more in the penalty box, I really struggle with,” he added.

“If the customer has a choice, they are probably going to take the quickest, fastest, most convenient model to purchase,” suggested Ryan Spinner, head of innovation at Aviva Canada, and another member of the panel.

“I think that is the challenge for everyone: to be in the right place, right time, with the right product and proposition. Whoever can provide that in the most simplistic form will win,” Spinner said.

“For many organizations, like yourselves included, keeping a process digital represents an opportunity to actually ease the regulatory and the compliance burden and tighten up compliance,” said Andrea Masterton, director of corporate marketing for eSignLive by VASCO, during the broker forum.

“When you keep a process electronic, you have unprecedented visibility and control over that process,” Masterton said during the session, e-Signature FAQ for Brokers.

“You can build workflow rules to make sure that common mistakes like missing signatures, missing pages, missing documents completely goes away,” she maintained. “So from an E&O (errors and omissions) perspective, risk goes down,” she added.

Electronic signatures “are being used by companies big and small all across the country and across a variety of industries,” Masterton said.

As such, e-signatures should be viewed as table stakes, she suggested.

Pointing out that electronic signatures have been recognized by provincial and federal laws since the early 2000s, though, still too many brokers are “stuck on paper,” Masterton argued.

APPS CAN HELP BROKERAGES BE TOP OF MIND

Having a broker’s brand right on the customer’s phone, as would be the case with an app, is a very attractive proposition, Darryl May, principal with KTX Insurance Brokers, suggested during the broker forum.

“I think just having our logo on someone’s phone is a powerful thing and that’s expensive real estate,” May said in relaying what the brokerage is doing with its current app.

“Getting that there makes sure that people, when they think about their insurance, it’s right there; they see it every day, right in front of them,” he pointed out during the session, Customer Engagement & Digital Self-Service.

Beyond being top of mind, though, is the need to adapt in line with the wants of customers.

“Every client that is registering currently, we are sending them a survey to find out what they like about it (app), what they would like to see from the app and using that feedback to drive new functionality in the future,” May told forum attendees.

The brokerage is also considering looking at a chatbot down the road, May reported. “We think that this is going to reduce the phone calls and some unnecessary touch points that we’re engaging with our clients on and let our brokers focus on the upselling, cross-selling and advice-based stuff that they should be spending their time on,” he added.

“For any broker out there, when you’re looking at technology, the best place to start is to look at the key issues you want to address as an organization and making sure that if you solve those issues, they actually help you on your bottom line,” May advised.

TECHNOLOGY ON THE FRONT LINES

Gary Gardner, senior vice president of global client development for Crawford & Company, discussed the impact of the company’s majority acquisition of WeGoLook this past January.

Although these “lookers” are not licensed adjusters, they get the process rolling, he pointed out.

With a house fire, for example, “why does it have to be an adjuster doing all the front-line work?” Gardner asked.

“The reality is so much of this is automated now. All I need is somebody to take the picture, so it’s either the policyholder or a looker,” Gardner said.

“We see this as a revolutionary way to go into the marketplace with a variable workforce,” he added.

Brokers could provide added value to their customers by suggesting offers that help save money on home and auto insurance, Bill Morris, senior partner with Navicom Inc., noted at the forum.

“Who doesn’t want to save money? Who knows more about potential ways to save money on cars and homes than your industry?” Morris asked during the session, the Future of Customer Engagement.

Brokers could tell customers about things such as offering a 15% discount on snow tires or electronic access to all insurance policies, he suggested.

With regard to the latter example, his company’s research shows that interest is more prominent with younger generations (those under 25 and 25- to 39-year-olds), “because that’s what they’re expecting,” Morris said, suggesting that it “could be a game-changer.”

What customers want to talk about “historically, are not areas where brokers

Another valuable customer engagement asset is the ability to get answers to any question in real time.

“That’s the world we live in now. We know that technology is coming; it’s here. We know that disruption is under way. Why not be the leaders?” Morris asked.

“The opportunity is for you to grab that disruption,” he suggested.