Running past the finish line

Dan Langer likes to run. He applies the energy he gains from being fit and fast to everything he does, including his role as president of the Canadian Insurance Claims Managers Association (CICMA), which he has taken on as a retirement project. Dan took a break from his marathon training (his next objective is the New Orleans marathon in March 2018) to chat about his role as president of CICMA, collaboration and where he sees claims in the future.

As with many of a certain age in the claims business, Dan took up adjusting not as part of a grand career plan. In his case it was more of an antidote to boredom, working in the banking industry. And it almost didn’t happen.

He showed up for a job interview straight from the hockey arena where he was coaching 10-year-olds, wearing “sweatpants and a hockey jacket, with a whistle around my neck, and I’m thinking, ’this isn’t really going well’.”

Nonetheless he landed the job and began his claims career in 1983 with Liberty Mutual in Toronto as an all-lines adjuster. After a few years there he moved on to Prudential, taking a job as an examiner. A few years on he ended up back at Liberty when they bought Prudential’s book of business. 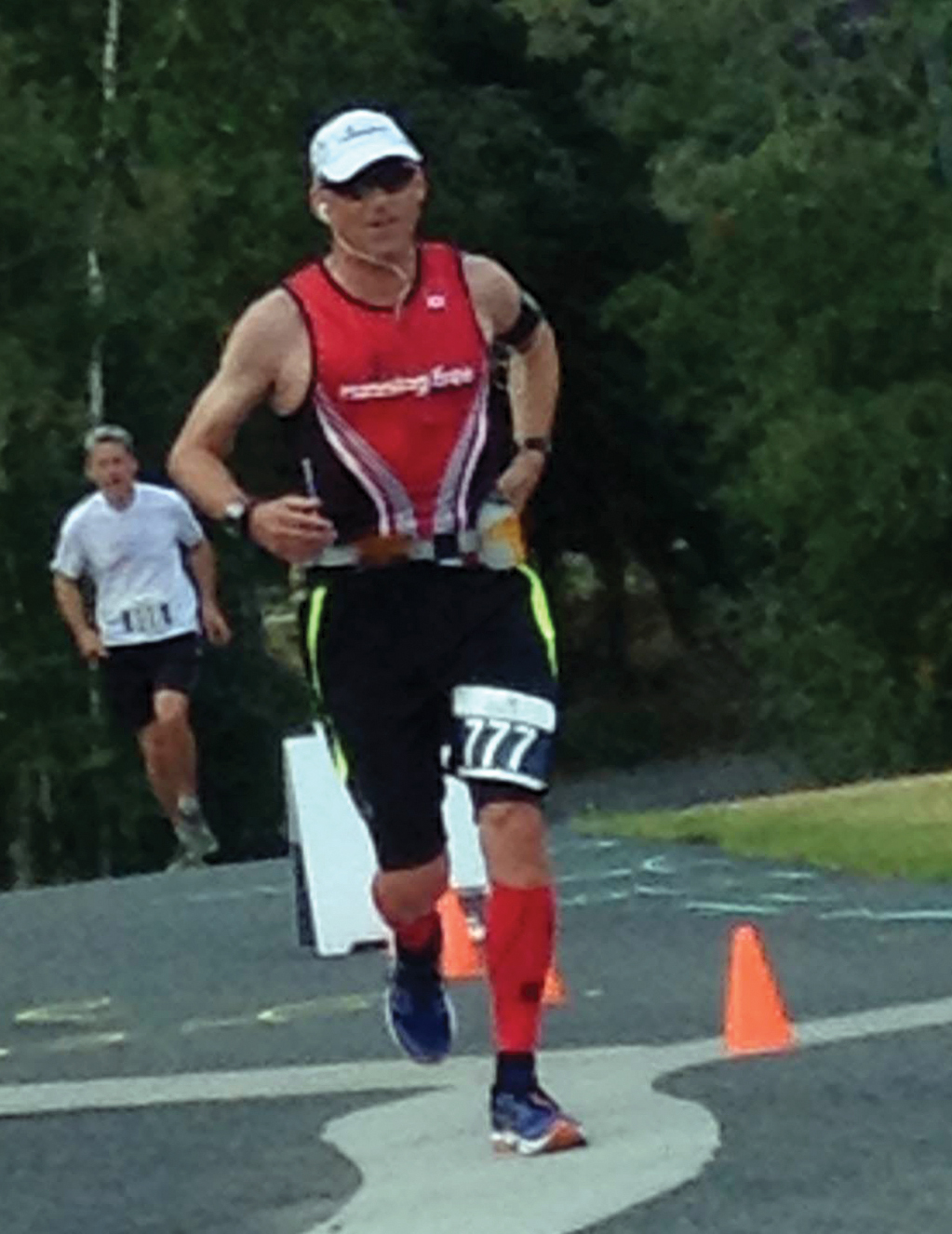 Dan Langer approaches the finish line at the 2013 Yellowknife Marathon.

His job as a supervisor entailed doing a fair bit of training adjusters, which ultimately landed him a job based in Boston. Starting in 1999 he relocated there, travelling around the US offering bodily injury training. After 18 months of being on the road two weeks out of four, he took a new job as an examiner, overseeing larger losses. He was responsible for three divisions, each with eight or nine offices.

But as with his start in claims running, too, almost didn’t work out. He gave up after three months due to sore knees. But, like clockwork, the marathon came by the following April and after being re-inspired he got a copy of Running for Dummies. He’s been pounding the pavement ever since.

On his return from Boston to Toronto, when Meloche Monnex bought the personal lines business from Liberty Mutual, Dan switched to being a manager on the auto side, then bodily injury and finally in a national role. He retired from the company in January 2015, but since then has performed several claims-related contracts, helping out at a friend’s company in the Lindsay area.

Although Dan is finished with his formal career, he is intent on maintaining his sanity and helping the industry through his association work. He became active in CICMA in late 2004 on his return from Boston. Subsequently, when the Ontario chapter was hosting the AGM, he was invited to work on the organizing committee, and never looked back. At first he was instrumental in updating the association’s website, and from there he was elected president for a two-year term.

“It does take a level of commitment not just to the organization, but also to the industry,” he says. “I’ve been very fortunate to be able to work with some very dedicated and hard-working people through my tenure on the Ontario chapter.”

As president, Dan says that providing education and networking opportunities to the members is his primary goal. But he is also aware that, “One of the challenges that we have is maintaining a level of relevance to our members. What are we providing to our members to keep them coming in? In some ways, but not too overtly because we don’t want to scare off the existing membership, we are look ing at the next generation. How can we attract and retain the next level of claims leaders to come to the CICMA and see some value in that?”

He believes there is still a “pervasive” belief that “to be a member of the CICMA you have to be a claims manager”. The problem is that in the current claims environment, “with mergers and acquisitions and the way companies are downsizing and reorganizing and growing and constricting, there are fewer and fewer titles of claims manager,” he says. “There are still many, many people who are out there providing that function of managing claims and managing claims personnel or leading or guiding claims personnel, but their title isn’t claims manager.”

The Ontario chapter has adopted a broader interpretation eligibility for membership in order to ensure continued relevance for the organization. As Dan points out, with the massive outflow of baby boomers from the industry, it will be increasingly important to adjust definitions in order to stay relevant. “In order to continue to make the organization a national organization, we’re going to have to move towards broadening that scope to include the claims leaders and have that more universal acceptance.”

Continuing the theme of succession, Dan notes that in order to attract the younger generation, it’s important to “speak their language”. To that end he says the CICMA’s website is a priority. “We try to make it a valuable tool to communicate, but we’re also looking at expanding our presence in other social media areas,” he says.

“We have to reach out to the next generation, in the environment where they’re comfortable. And it’s not a comfortable environment for us at this point, so we have to make sure that we’re able to get the right people in to help us with that and to move that way.”

He notes that as a not-for-profit the association relies on the talents and energy of its volunteers, rather than on cash for social media consultants.

“At the Ontario Chapter level we’ve got some bright, key people who have come on. That’s very encouraging,” he says, adding that there are several new national-level delegates who have come from the chapters.

“They are younger than I am, and they are much more capable of handling and working in those social media environments. So we are beginning to get some younger blood at the table with some fresher ideas. Their acceptance and willingness to champion these changes and take them back to their chapters is fantastic.”

This interview, featuring CICMA’s president in the CIAA’s magazine, is just one example of the kind of interaction taking place between the associations. The CICMA/CIAA annual joint conference will be in its 51st year in 2018.

“We’ve had a very good working relationship on that for the last 50 years,” Dan says. But he also notes that at a recent meeting of the two groups’ executives, someone pointed out that each group’s mandate of providing their constituency with educational value sometimes ends up with duplicated educational presentations. “As someone put it at the table, ’we’re stealing each others’ lunch’” he adds.

Consequently, outlines are being drawn for the two organizations to work together, to offer “more of these sorts of joint conferences where we are able to perhaps have a bigger presentation, a bigger event, so we will not be competing against each other to roll out this topic to our constituencies, but rather trying to combine our resources to make these presentations.”

The business of claims

Another piece of the reason for Dan’s continuing involvement, past the normal retirement ’finish line’, is his ongoing concern for the industry and its future. He is particularly watching the continuing process of mergers and acquisitions narrowing the breadth of organizations in insurance. He notes the trend of large companies taking over insurance operations but coming from a different business background with the objective of bringing in processes and streamlining things that worked in other operations.

“Claims departments have often been that red-headed stepchild in that fable, right? ’Everybody else brings in money, you cost us.’ Often when the company’s looking to cut expenses—and everybody’s looking to cut expenses—they cut in training, and they cut in claims. That, unfortunately means you’re cutting your service to your customers because if the people who answer the phone in the claims department don’t know how to deal with the person, can’t handle the claim, then you get a lot of dissatisfied customers, and then you won’t get brand loyalty,” he says.

“So I think insurance companies need to view claims a little bit differently and with more of an eye towards that human touch to claims. Instead of everything being process driven, but rather, the outcome being satisfactory for the policyholders.”  •

More Features
Related
Anderson calls on government to act on insurance issues
U.S. insurers will need to focus on innovation to remain successful: EY
Claims professionals speak out amid allegations of contractors providing insurance advice
How business interruption claims could play out in the legal marijuana space