It’s fair to say that Nick Stagliano and Scott Mastromatteo dislike bureaucracy. In fact, their need to get out from under the load of meetings, paperwork and layers of management was a principal motivator in the founding of NSA Claims.

After an early career in claims, working his way up to management, Nick formed the company (NSA is short for Nick Stagliano and Associates) in 2009, based from a cubicle in his one client’s office. With their support he decided to expand and find more clients, moving into his own space and bringing Scott in as his right-hand man shortly afterwards. 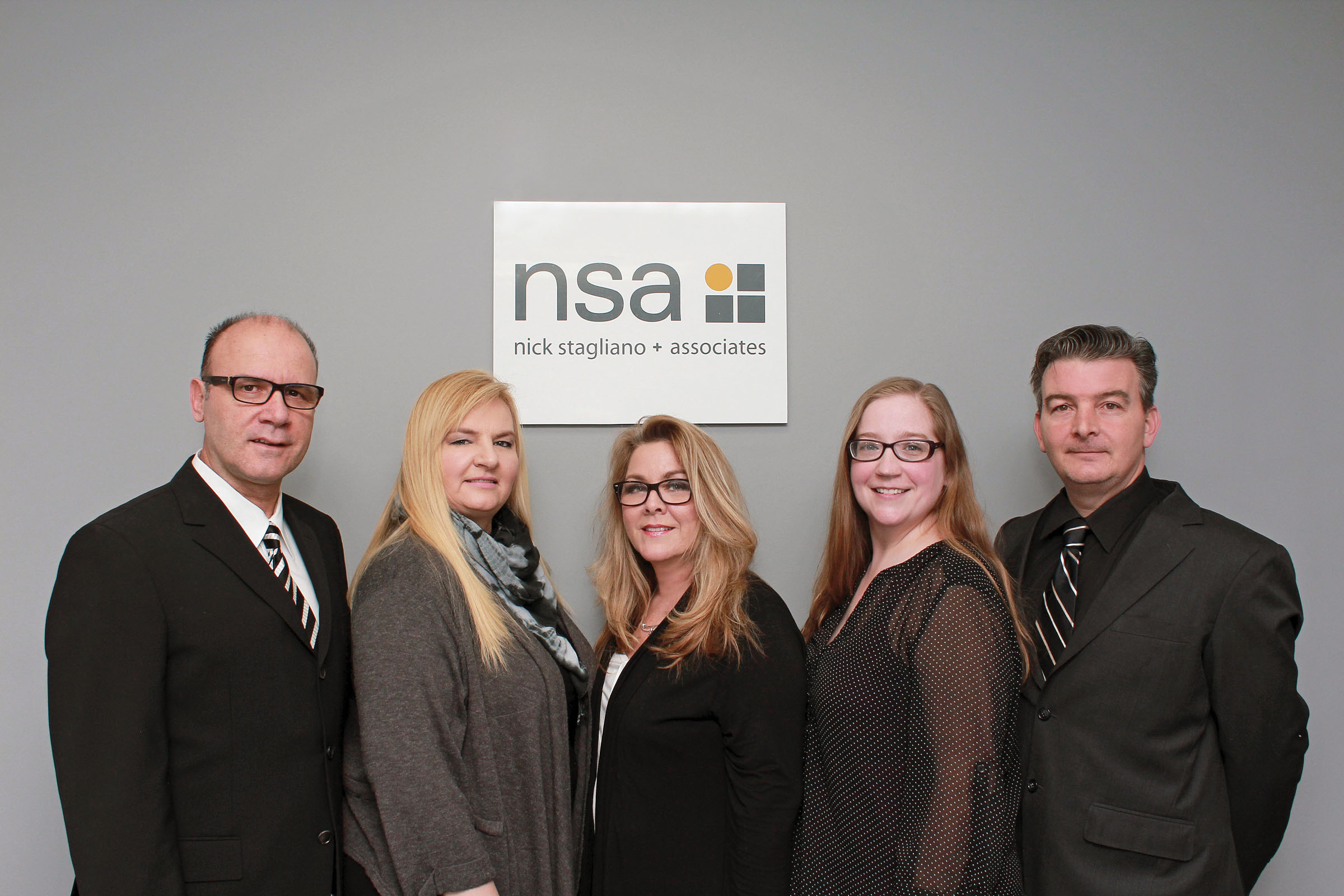 Now NSA Claims, based in Mississauga, Ontario, has grown to a staff of nine, including Nick and Scott. But the customer-centric philosophy on which Nick founded the business has not changed.

“When we get a claim, it’s imperative that we treat every claim as if it’s a new client,” he says. “You can’t take your existing clients for granted. And so myself, and Scott, and the rest of the other staff that I employ, we all understand how imperative it is to receive a claim, and handle it professionally, with respect, and with customer service. At the end of the day, we’re in that customer service industry, whether it’s to your clients, or to your claimants, or to the policyholders.”

This notion of how the claims business should be done was instilled from early on in his career. Nick started working in the business as an intern while he was enrolled in the insurance program at Toronto’s George Brown College. On graduation he received a bursary for receiving top marks in his class, and landed a job at Pilot Insurance.

His first job with an IA firm was with Ponton Coleshill Edwards & Associates where he “was literally driving one of the partners around to their claims calls while they dictated in the back seat. And I would go get their cars washed, and pick up laundry.”

But it wasn’t all chauffeur and errand boy: “It opened me up to all lines of adjusting. Which really, moving forward to today, was a blessing in disguise in that I got the great opportunity of handling automobile claims, property claims, trucking claims, liability claims.” Being able to handle all lines in today’s environment is a huge asset he says.

Likewise, Scott says his own time at Ponton Coleshill Edwards & Associates was “the best experience I’ve ever had.”  The company “was like a family,” Nick says, with a caring group of people, which set the tone that he wanted to maintain when he started NSA Claims, after a 17-year run with the various iterations that his mentor company went through.

A network of trust

When Scott agreed to join Nick in the fledgling NSA Claims, one thing he insisted on was a CIAA membership. “That was my mandate to Nick. I’m like, ‘We got to become members,'” he laughs.

He finds a lot of value in the association through the connections and networking it brings. “It’s great because there’s a lot of firms similar to us all over the country. Depending on the clients’ needs, it’s not uncommon for me to get a call, ‘Do you know a good adjuster in Vancouver?’ A lot of it is referenced through the members, the companies that are 50 members or less. You get to know people in certain parts of the country, and then you trust them. I have no problem referring clients to anybody. We’ve done it in the past, and we’ll continue to do it in the future,” he says.

Nick agrees that the association brings value as a voice for the independent adjuster. “I think they should be commended for the exposure they bring us,” he says.

Now on their own for the past nine years, Nick and Scott find technology is both a boon and a bugbear. Both point to the accelerated pace that email demands, especially in the claims business.

“You feel obligated, when you receive an email from a client, you feel compelled to respond,” Nick says.

It makes business move “so fast that it’s hard to produce a furnished report and keep it up to date with the e-mails and the communication,” Scott adds.

But, they understand that adaptation is key to meeting customer needs. Technology goes far beyond email these days, Nick says. It doesn’t matter the cost, he notes, you have to ensure that your systems allow for client access to files, and that means there is a never-ending requirement for system updates.

Nick also ruminates on the changing environment, in which smaller IA companies are competing against national firms. He notes that the small IAs need to stick together by developing reciprocal relationships to allow better geographical coverage.

“Those sort of one-off claims that we were accustomed to having received in the years gone by are no longer there. I would say it’s not a constant struggle, but it’s certainly challenging going out there to market yourself,” he adds.

He relies on his staff to reflect his values of customer service. “It’s crucial in that the company, the office, the staff, whether it’s administration or adjusters, should reflect your company’s character and commitment to professionalism…which is what Scott and the rest of the adjusters do,” Nick says.

Scott likes to put it into the context of what changed when their previous employer grew into a large firm: “We were both of the mindset that we work for the client, so the underlying client, the insurer or whoever it may be, they’re the one that tells us what to do, rather than, internally, you’ve got to follow all these procedures.”

“My intent is always to stay small,” Nick says. “I’ve always believed that if you service the existing clients that you do have, they will support you. While you always want to go out and get more business, it doesn’t necessarily mean it’s a good thing. Because you want to continue doing good quality work for your existing clients that have always supported you.”

He notes that growing, taking on more clients, just adds stress, “because whether it’s hiring additional staff support or adjusters, you need to maintain that same level of quality. And nevermind the expenses incurred by way office administration, office space and equipment.”

“I didn’t intend to grow as big as I did, where I am today. I’m up to eight people, but it’s just the joy of accomplishing without any help, or any partners, or any financial assistance,” he says.

As it is – running his own company, working longer hours and for not much pay – Nick says he does it because he loves knowing that his decisions are his alone.

“It’s just rewarding to be able to walk into the office every day and know that any decision you make, it’s yours and nobody can tell you otherwise. You can get an opinion from your staff and they can tell you that you’re an idiot [which, he adds, they would, in a friendly way] but while I take on every opinion, sarcastic or not, it’s my decision at the end of the day.”