Brokers are not giving their carriers high marks when it comes to taking a consistent approach to overland flood coverage.

Are clients covered for overland flood damage or not? It doesn’t appear to be an easy question to answer, as claims roll in from massive flooding events that swept across Ontario, Quebec and New Brunswick in May.

One broker tells Canadian Underwriter that, after the May 2018 flooding event in Grand Forks, B.C. , insureds on the same street often had different experiences.
“You could go down one street, and you had one person with full policy limits, the next door neighbour had no coverage, and then the neighbour after that has a limit of $10,000 of coverage provided,” reports Sam Cowan, vice president of sales and marketing with RHC Insurance Brokers, which has an office in Grand Forks. “It was all over the map. It wasn’t consistent to geography or proximity to the river. It was just terrible, to be quite honest.” 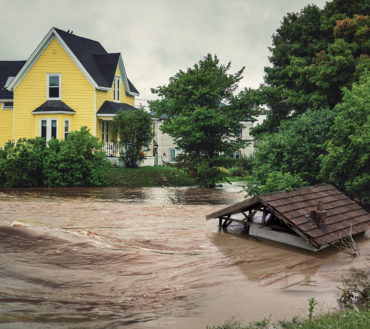 In another example, a commercial building was inundated with both sewer backup and overland flood water. “The building owner had no coverage, because the insurer decided to deny it,” Cowan says. Meanwhile, “the two tenants inside the building both had coverage provided under the sewer backup endorsement.”

Cowan points out that his brokerage had a lot of Grand Forks clients who were covered with a full policy limits package. In eastern Canada, a number of insured homeowners have had their claims covered. “Many have been at the full policy limit for overland water,” says Andrew Campbell, office manager at Hall & Fairweather Insurance in Saint John, N.B. (which was recently acquired by Archway Insurance). Any consistency issues generally arose because either the clients did not purchase coverage, or the insurers did not offer coverage to meet their particular circumstances.

“Historically, companies were more flexible in this regard, but now that overland water products are available, they are denying these claims,” Campbell says. “This is confusing for clients, especially if they had a previous claim paid under [sewer backup] and are now denied coverage for the same loss because they do not have overland water coverage.”

One Manitoba brokerage reports seeing a more consistent approach by its carriers. That said, “there is a difference between sewer backup coverage, overland water and ground water coverage, and there is a difference between what is offered by which company, and in what combination with what limits,” says Cheryl Gemmell, office manager and personal lines manager at Rempel Insurance Brokers Ltd. in Morris, Man.

Before 2015, only sewer backup was typically available in Canada. The situation changed after a 2013 flood in Calgary caused $2 billion worth of insured damage. Now, policies typically cover three types of water damage claims:

• Overland flood
Loss or damage from an overflowing of a nearby body of water, or sometimes torrential rainfall or snowmelt. “Quite a few of these flood endorsements on the residential end have low limitations, where if it comes through a door, a window or an opening…it’s not covered,” Cowan warns.
• Sewer backup
Back-up of a sewer, septic tank or sump system into the home.
• Ground water
Water that makes its way through various cracks and orifices in the foundation, leaking inside the home (only covered by some carriers).

Gemmell describes a pyramid approach to water coverage. To get ground water coverage, you must have overland flood; to get overland flood, you need to have sewer backup.
“Some companies have packaged them, where you get a water protection endorsement that includes two or three of those; with other companies, it’s not packaged,” she says.