Doug Reevey has been in the auto repair business for nearly 20 years, but his background is somewhat different from many of his industry peers.

“I am a bit of an anomaly in the automotive parts and service business,” says Reevey, outgoing chair of the Automotive Industries Association of Canada (AIA Canada).

Among other things, AIA Canada is making an effort to give consumers a choice of where maintenance data from their vehicles is sent and researching the skills shortage. 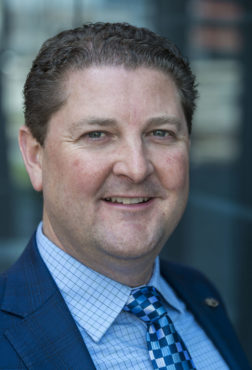 “The consolidation in the collision shop business is really being driven by insurance companies,” observes Reevey. “The insurance companies want to ensure that their customer has the best experience and they are willing to do business with those companies that invest in training for their staff and equipment for their business.”

A chartered professional accountant, Reevey used to work for a Big 4 accounting firm. He is now owner and president of Saint John, New Brunswick-based Autotec Inc., a member of the Autopro network that operates an auto repair facility and a wholesale and retail parts counter.

About half of Autotec’s business is on auto parts and service and the other half is on industrial sales of components, starters, alternators and batteries, among other things. His customers include transit commissions and Canadian Forces Base Gagetown, near Fredericton.

“A shop owner, in the past, anyway, typically was a licensed technician and ends up going out on their own and either buying a shop or starting a shop on their own and they try to figure out how to run a business,” says Reevey. “They know how to change water pumps and oil, alternators and starters. I come at it from the exact opposite. I understand the business end of it, but I couldn’t change an alternator or a starter or a water pump on my truck at all.”

Around 2009, Reevey notes, AIA Canada formed an audit and finance committee, which he was asked to join. He also served three years as an AIA Canada director-at-large, and held various executive positions.

Reevey’s term as chair ends May 16, the date of AIA Canada’s annual general meeting. He will then remain on the Board of Directors as past chair for a year.

Born and raised in Rothesay, just outside of Saint John, Reevey studied business at Dalhousie University, graduating in 1993 with a business commerce degree.

Although his father was in the auto business, it was “absolutely not” his ambition, at an early age, to run a repair facility, Reevey relays.

Instead, after finishing school, Reevey worked for five years at Ernst & Young LLP.

“I knew that wasn’t where I wanted to spend the majority of my career,” he notes. But “it was a wonderful grounding, fabulous place to get first-hand exposure to businesses, how they made money, why they lost money, understanding how to read financial statements. It was a great grounding for business in general.”

In the mid-1990s, Reevey’s father owned a chain of 12 jobber stores in New Brunswick, Nova Scotia and Prince Edward Island.

“When he sold the business, there was one location that had a repair facility attached to it that they didn’t want to purchase,” Reevey recounts.

“So he kept it and turned around to me and said, ‘I don’t want this anymore. If you want it, here’s the price. You can finance it through the company and here you go,'” he says.

AIA Canada’s activities include research, government relations and liaising with other industry groups.

One key issue is the data on maintenance issues gleaned from telematics in late-model vehicles.

“What typically happens in newer vehicles is, it will alert you to, say, ‘you’ve got maintenance issues coming up,'” Reevey points out.

“If it’s a Ford, that data will flow to the nearest Ford dealership and they will order the parts and schedule the appointment,” he reports.

Original equipment manufacturers (OEMs) “are trying to filter and trying to push as much business back to the dealerships as possible and we are trying to ensure that the consumer, number one, understands this, and number two, has the choice on where the data from their car goes,” he says. “Does it go back to the dealership? Or can it go back to someone like me in the aftermarket where you choose to get your car serviced and maintained?”

AIA Canada is “not suggesting” OEM dealers “don’t do good work or that they are not priced competitively,” Reevey says. “All we are asking, as an industry, is give the consumer a choice on where that data goes.”

AIA Canada is also undertaking a labour market analysis of the auto aftermarket industry, he reports.

“We believe that there is a fairly significant skills shortage that is going to affect our industry and so we have undertaken a massive study… to try and gauge exactly where we stand in terms of labour resources,” Reevey notes.

There is a shortage not only of technicians, but of “all positions throughout the Canadian aftermarket,” he says.

“AIA is trying to engage the young folks coming out of high school and university through student career days,” Reevey reports.

“Whether it is someone turning a wrench or someone in finance or in marketing, or whether it’s somebody in human relations – the aftermarket is a viable place to make a wonderful living.”

This is something Reevey can attest to as he enters his third decade in the industry.

“I have very little interest in cars, believe it or not, but I have a passion for the business in terms of making sure that we, as a business, meet our customers’ needs and you don’t need to be a car guy to enjoy that aspect of it.”