Don’t be a dumb waiter

One day at the RIMS Canada Conference, after absorbing the latest emerging threats that could knock out your business, you may enjoy a good stiff drink at the bar. But when you ask for that second beer or scotch, the server may refuse, suggesting you order water, coffee or food instead.

The server does not intend to treat you like a kid. He or she is simply doing what you do every day for your employer — managing risk. 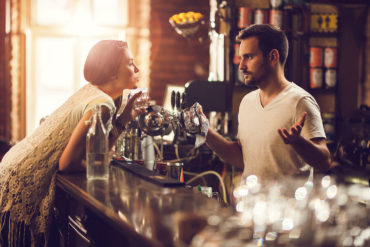 This is because a customer could drink enough to get their blood alcohol level over the legal limit, get behind the wheel of a car, and cause an accident that hurts an innocent person. The victim then launches a personal injury lawsuit. Named as defendants — in addition to the at-fault motorist and vehicle owner — are the bar, nightclub or restaurant that served alcohol to that motorist.

The establishment serving the booze will be found at least partly liable if a judge or jury is convinced the motorist was served to the point of intoxication.

So if you’re nursing a cocktail in Edmonton while reading Canadian Underwriter between RIMS sessions, your server is mandated by Alberta law to be trained under ProServe. That program aims to teach servers about their legal liability, how to detect if a patron is intoxicated, and when to refuse service. Ontario has pretty much the same requirement, but under the different name of Smart Serve.
“If you followed that to the letter, and that is pretty hard to do, you would be free and clear of liability,” Reisler says of Smart Serve.
It’s hard to follow Smart Serve “to the letter” because the server is supposed to figure out whether a person entering the establishment is already intoxicated. You practically need a breathalyzer if you want to guarantee you’re not serving someone to the point of intoxication, says Reisler, owner of Reisler Law PC.

That’s what happened to the All Star Tap & Grill House in the Ontario Niagara region community of Pelham.

In Hummel v. Jantzi, released in June, the Ontario Superior Court of Justice ruled that All Star was 20% liable for a motor vehicle accident that left Wesley Hummel with a catastrophic brain injury in 2012. The ruling on damages has not been released as of press time. It’s known that the cost of Hummel’s future care will be greater than $9 million, and his loss of future income is $1.7 million.

Hummel had been drinking with five companions, including Philip Jantzi, at All Star while watching the Stanley Cup finals the night of June 6, 2012. At about 1:30 a.m., Hummel was riding in the front seat of vehicle driven by Jantzi when an accident occurred. Hummel was found 25% contributorily negligent. Jantzi pleaded guilty to operating a motor vehicle while impaired by alcohol and causing bodily harm to Hummel. Jantzi is mostly liable.

While drinking at the All Star, the group of six ordered four rounds of 12 glasses of beer. Each glass had about half a bottle’s worth of beer. There was a special deal in effect, where you could order a round of 12 beers for $12. That kind of deal is “specifically discouraged” by the Smart Serve program, Justice Gerald Taylor wrote in his ruling, ending a trial that started in late 2018.

The owner of the bar told the court that his bar had no procedure in place to monitor how much any one person drank when the 12 beers for $12 special was served to a group.
Justice Taylor found that Jantzi drank about 20 beers and that his blood alcohol level would have been between 0.22% and 0.24% at the time he left the bar. It is a Canada-wide criminal offence to drive with a blood alcohol level of more than 0.08%.

During the trial, a server agreed that it is difficult to count the number of drinks any individual patron consumes if a group orders the 12 for $12 special.

So, is there a manager or assistant manager on duty – in addition to servers – when alcohol is being served? This is one question that appears on some insurers’ applications for bars and nightclubs. Underwriters also ask if:
• servers are determining whether a patron will be driving after leaving the premises
• staff will call a taxi for patrons
• there is a procedure in place for patrons who are already impaired when they arrive
• a procedure is in place for patrons who become intoxicated while at the establishments.

Such questions appear on an application form posted to the website of April Canada, a managing general agent.

“At any given time, certain underwriters are bullish on the alcohol liability business, then they get cold feet,” Reisler says. “Then the market becomes hard, and then it gets difficult and expensive to get that coverage.”

If a bar or lounge operator is submitting an application to online brokerage Zensurance, the prospective client is asked whether it employs bouncers – and if so, how many bouncers they have.

Zensurance also asks bars and lounges applying for insurance to provide their total revenue and break it down by food, liquor, non-alcoholic beverages and “other.”
It’s not just bars and restaurants that may need insurance for alcohol liability, says Tyson Peel, director of property and casualty for managing general agent Burns & Wilcox Canada.

Some organizations may be putting on a special event where alcohol is being served, but the people running those events may be unaware of some of provisions in Smart Serve. So it’s a good idea to hire wait staff who are Smart Serve-qualified and good at monitoring patrons’ alcohol consumption, says Peel.

You can be held liable just because you occupy property and you know alcohol is being served in an organized way. “It’s a situation I think that is ripe for litigation,” Reisler says.

In Ontario, the relaxation of liquor regulations that took effect May 6 can also affect clients’ liability risk. For example, Ontario clients are now allowed to apply for a broader range of special occasion permits. That type of permit is intended for clients whose core business is not serving alcohol, but who may wish to serve alcohol on a one-off basis – at a wedding, for example.

Since May 6, Ontario has allowed what it calls “tailgate parties,” where alcohol can be served in connection with sporting events.

Associating drinking with vehicles (as implied by a “tailgate party”) is not something Reisler encourages.

“The plaintiffs’ bar is very aggressive about these things,” Reisler observes. “If you provide a place where people are drinking around cars, and the expectation is that, when the game’s over or when the party’s over, people are going to get in the car and drive, you are opening the door to potential liability.”

Just because it’s legal does not mean it’s a good idea.

For example, in May, Ontario rescinded its 35-year-old prohibition on advertising a happy hour. Now Ontario-licensed establishments are legally allowed to use the terms “happy hour” and “cheap drinks” in advertising. However, “that is actually directly contrary to what they say in Smart Serve,” Reisler says. And courts will still hold defendants to a “very high standard” if they are accused of encouraging over-consumption.
“It may be legal to advertise ‘happy hour’ or sell drinks at a reduced price,” Reisler says, “but the plaintiff’s counsel is still going to rake the tavern owner over the coals for promoting the sale of alcohol at the expense of the safety of their customers.

“That is an argument that appeals to emotion and can be successful.”