Patti Kernaghan, president and CEO of Kernaghan Adjusters, tells Canadian Underwriter why the time is now for a harmonized adjuster’s licence across Canada.

cu | We’re told it’s easier to bring an adjuster into Canada from the U.S. than it is to move a Canadian adjuster from one province or territory into another. What are the existing mobility barriers?
The biggest barrier is licensing. CIAA (the Canadian Independent Adjusters’ Association) has worked tirelessly for decades to address any interprovincial licensing issues that arise, especially during catastrophes. Regulators still don’t understand the urgency with which we need to move when a catastrophe occurs. This is a huge mobility issue. Yes, it is easy to get adjusters from the U.S. into Canada, and it is exasperating for Canadian companies to move people from province to province. For example, let’s say a big storm in Alberta results in a catastrophic event that requires additional resources to be deployed from Ontario. An adjuster in the province of Ontario with a Letter of Authority will need to write an exam before they are licensed in Alberta. There are idiosyncrasies like this in each province. I’ve worked with the regulators for a number of years. I’ve represented the CIAA at a number of their meetings and made presentations. I hope there will be changes in 2019.

cu | Have any steps been taken to address this issue?
The regulators will consider various property and casualty [P&C] issues brought before them in any given meeting and will then need to prioritize them. Independent adjusters are a vertical market within the P&C industry, so we’re between 3% to 5% of the property and casualty industry. We don’t demand enough attention. Changes were made to the Manitoba laws for independent adjusting licences a few years ago. However, because of a government change, they still haven’t gone through. It’s very frustrating. CIAA is again at the table talking to the regulators. Hopefully there will be some changes afoot; something may come down the pipeline in 2019.

cu | Any more details about what might happen in 2019?
It’s still too early to tell. 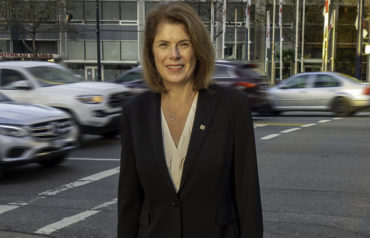 cu | In your view, what needs to happen in the long-term?
Long-term, we need a hybrid system of self-regulation in concert with all of the regulators. They can do the discipline, but we need to be there to create a harmonized licensing process across Canada. It is the only way that makes sense. When I started in 1988, we had a storm in my first couple of years in Manitoba. I wrote the licensing body and said, ‘We’re bringing in these people.’ They wrote back and said, ‘Wow, thank you, nobody ever tells us.’ We had licences then; at the time, we did not have all the restrictions that are in place now. It’s slowly been built up over the decades. Now we need to tear it down and harmonize and work together as a profession.

cu | Besides mobility, what would you say is the biggest challenge for independent adjusters right now?
The biggest challenge for independent adjusters is the changing partnership with our clients. For decades, insurance companies have internalized the claims process; now that’s heightened with more task assignments. It’s a little bit like the commoditization of general insurance claims.

cu | How were the relationships then and how is it changing now?
In the 1980s, we did glass claims, we did every kind of claim possible in the market. Today, many of those claims are internalized with the insurers. They are much less dependent on independent adjusters except for specialized claims, which includes transportation, aviation, forestry equipment, and large property losses. Once a claim hits a certain threshold, you need the expertise of a seasoned adjuster, somebody who has the skill set and the experience to deal with the circumstances. Day-to-day
relationships have changed in that regard. Independent adjusters are
doing more task assignments compared to what they used to be doing; what ends up happening is that independent adjusters at the more general level are not learning the skill set that can take them to the larger losses. That’s a
shortcoming in the industry.

cu | How does technology play into this, particularly property claims adjusting?
More technology is available today for the property adjuster to use in the field. For example, an adjuster is able to enter a property and take a 360-degree video of the damage. If the adjuster is not inclined to use technology, it makes it very difficult for the individual. We put Microsoft Surface Pro tablets into the hands of our field adjusters and we’re continually discovering new efficiencies. Some people have been very excited about using Surface Pro, and they’re having documents signed in the field, uploading the photographs and documents. Others are somewhat circumspect about whether this is a technology they want to use. The level of acceptance isn’t necessarily related to the age of the adjuster, sometimes it’s about whether people are curious enough to discover new things.

cu | How about emerging risks such as cannabis, cyber and the sharing economy?
When it comes to these risks, the fact is insurance is a contract. It’s either a property claim, a liability claim or an auto claim, and you apply the same principles. You need to switch gears when it comes to the type of specialist who is going to help you. For instance, with a cannabis claim, you’re not going to hire a lawyer who specializes in liability claims such as slip-and-falls. You need somebody who specializes in cannabis.

cu | What about drones?
We have not invested in drone capability. We’re sitting on the edge on that one. All sorts of different issues need to be considered – everything from airspace (you need certain licences) to privacy. We just haven’t dabbled in that area yet, but things change quickly.

cu | How are adjusters coping with the physical and emotional demands of the job?
It’s empathy on steroids, it’s very difficult. Adjusters must be empathetic; at the same time, they have to consider the contract. They’re walking a tight rope and it creates stress, no question, especially when it’s long hours like in the Fort McMurray, Alta. wildfires. What sets you apart as an adjuster is your ability to communicate and deal with adversity. Our objective as a management team is to spend time with our adjusters and our staff to ensure things are going well with them. It’s very important to do that because, no question, there’s a lot of emotional burnout affecting independent adjusters. cu