The costs of flood damage across the country are escalating. For example, Insurance Bureau of Canada reports that property and casualty insurance payouts related to extreme weather have more than doubled every five to 10 years since the 1980s, with flooding as the primary driver.

Relative to this lamentable trend, the costs of flooding can never be capped — and certainly not reversed — through efforts that focus primarily on, for example, shifting responsibility for losses among such key players as Public Safety Canada (Disaster Financial Assistance Arrangements), insurers and provincial and municipal governments. Shifting responsibility is the metaphoric equivalent of running from one location to the next on a sinking ship — it can create the illusion of a solution, while wasting time and ignoring the inevitable reality that the ship will, ultimately, sink.

Relative to Canada’s growing flood risk, the subject of focus should be on keeping the ship afloat rather than playing a financial shell game.

Fortunately, there is a simple, practical and cost-effective solution to mitigate a major cause of flood risk in Canada that should appeal to the interests of all stakeholders. Simply stated, by leaving natural wetlands natural, Canada can materially limit the costs associated with future floods.

Wetlands are naturally occurring repositories where water can accumulate following large storms, and then discharge slowly over time either downstream or into the ground water system. It has long been understood that as wetlands are transformed to accommodate agricultural development or urban growth, the flood mitigation capacity of wetlands would be diminished. However, what was not understood was the degree to which flood risk, and associated flood costs, might be influenced by the retention or loss of wetlands.

With more than 70% of southern Ontario’s pre-settlement wetlands having been lost through agricultural drainage, development, encroachment, land clearance, filling and road construction — and with similar losses noted in other provinces — quantification of the financial value that wetlands play in flood risk mitigation is long overdue.

The financial value of wetlands to attenuate flood costs was explored in a recent report from the Intact Centre on Climate Adaptation (ICCA). The report quantifies the potential for wetlands to limit flood risk and associated costs to residential homes, apartment buildings and industrial and commercial infrastructure, in both rural and urban settings in southern Ontario (with findings that have national applicability).

For both the rural site (located north of Mississauga) and the urban location (within Waterloo), computer models simulated a major fall flood (sensu Hurricane Hazel, 1954). Under conditions of a changing climate, whereby extreme weather will be more intense, Hurricane Hazel-level events will be increasingly common. For example, in June 2004, in proximity to Waterloo, a severe localized storm generated 160 millimetres of rainfall in four hours, and 202 millimetres of rainfall over 24 hours. 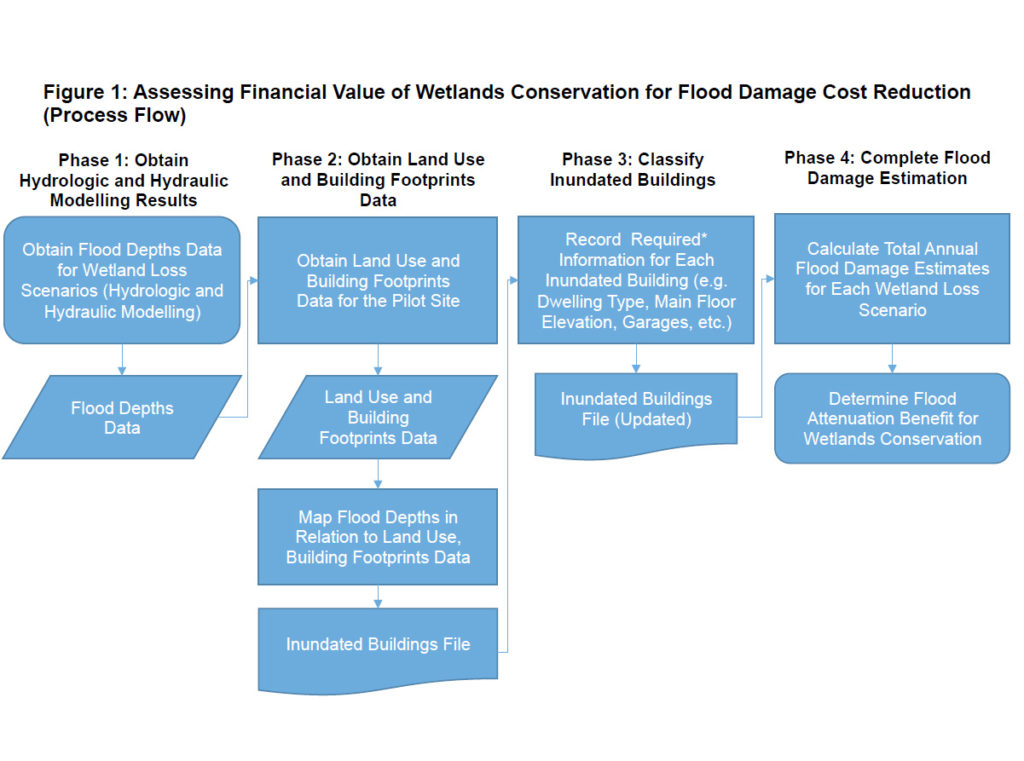 For both the urban and rural settings, under conditions of severe flooding with wetlands intact versus converted to agricultural development, costs of flooding were assessed relative to impacts on building structures and damage to building contents (Figure 1 from the ICCA report, shown below, offers an overview of the approach used to calculate flood damage from extreme weather). The difference between the two calculations reflected the direct financial value of wetlands to mitigate flood costs.

The additive value of wetlands to mitigate flood costs was substantial.

At the rural pilot site, under conditions whereby wetlands remained intact, flood damage costs were $8.9 million, which was $3.5 million or 29% lower than the $12.4 million cost that would have been realized had wetlands been replaced with agricultural development.

At the urban pilot site, if wetlands were maintained in their natural state, the cost of flood damages would have been $84.5 million, which was $51.1 million or 38% lower than the $135.6 million that would have occurred consequent to agricultural replacement.

If the modelling had assumed that wetlands were replaced by largely impervious surfaces (such as buildings, roads and parking lots), which increasingly characterize urban settings as opposed to agricultural development, the value of flood damage avoidance would have exceeded 29% to 38%. Thus, the report concludes the additive value of wetlands to reduce flood damage is conservative.

Recognizing that wetlands, under conditions of major storms, play a material role in limiting flood costs in both urban and rural settings, there is obvious need for broad-scale advocacy to retain and restore wetlands across Canada. Insurers and reinsurers should be prominent national voices in this effort.

With regard to discussions focusing on the utility of wetlands to limit flood risk, insurers will inevitably find themselves communicating with government agencies with whom they have had little interaction historically, such as natural resources, fishery and forestry ministries. That being the case, prior to meeting with such agencies, insurers should familiarize themselves with the additional benefits that wetlands convey relative to the interests of those agencies. Otherwise stated, insurers need to learn to expand their dialogue.

To illustrate, insurers should familiarize themselves with how wetlands function in the general framework of habitat protection, biodiversity improvements, water quality enhancement, drought attenuation and carbon sequestration.

Knowledge of all these areas will amplify the message that maintaining wetlands in their natural state is a financially prudent and socially desirable outcome for Canadian communities. Complementing the flood mitigation argument, with an additional cadre of benefits, will elevate receptivity by politicians to retain and restore wetlands.

The cost-effective function of wetlands to limit flood risk is also consistent with, and reinforcing of, the directives outlined in the Wetland Conservation Strategy for Ontario, Ontario’s Climate Change Action Plan and the Government of Canada’s Pan-Canadian Framework on Clean Growth and Climate Change, which are also documents with which insurers should familiarize themselves.

Inevitably, some stakeholders will push back on wetlands retention as an encroachment on much-needed urban and rural infrastructure expansion, or agricultural development (both positions have merit). Thus, arguments in favour of wetlands protection should be inventive, and to some extent, conciliatory.

There may be, for example, means to incorporate wetlands protection into new community design, such that the combined value of flood mitigation services, coupled with aesthetic value, can create both a demand and premium for a property that might otherwise be viewed as less desirable if either component is sacrificed.

Climate change is irreversible, and as a consequence, the extreme storms of today pale in comparison to those yet to occur. Efforts that focus on preparedness for these bigger storms must be put in place now since every day that society does not adapt is a day it no longer has.

At the top of the list of initiatives to which governments and insurers should commit, in an effort to limit flood risk, is the retention and restoration of natural wetlands. Every time big storms hit, wetlands will be the gift that keeps on giving.