Lance Miller, owner of Surex Insurance Brokers, bought his insurance business for $1 million. It was 2005 and he set it up in the tiny town of Magrath, Alta. Leveraging everything he had, he resolved to succeed.

Then he heard about a potential change in the Bank Act, which might have created an opportunity for banks to creep into the insurance business. 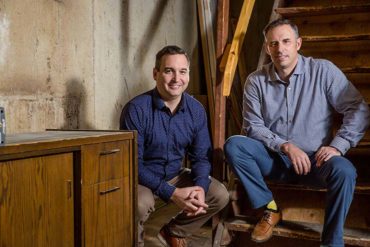 A lightbulb went off.

Inspired by this realization, Miller set about creating a new kind of insurance business, one that didn’t depend on walk-ins and brick-and-mortar stores. It didn’t even depend on any face-to-face contact.

He convinced a fellow entrepreneur, Matt Alston (who was then based in the United States), to join him in Canada to work on the new venture. A co-founder of the venture, Alston is currently the company’s chief operating officer, while Miller is CEO. Together, they started small in the cramped basement of Miller’s traditional insurance office, which had no windows and a hand-me-down server.

Such were the humble beginnings of SurexDirect.com, one of Canada’s first online brokerages.

Launched in March 2011, SurexDirect.com now boasts an annual premium revenue of more than $62 million, ranking it 22nd overall in the 2018 Growth 500 ranking of Canada’s Fastest-Growing Companies. It finished first for overall growth in Alberta.

The company had six full-time employees after its first  full year; now it employs more than 130 people and offers personal lines coverage in six provinces and two territories.

So how did Miller and Alston do it? How did they set up shop in a town of 2,300 residents and create one of the country’s most successful and fast-growing online insurance companies?

“Several million dollars later, we’re where we are now,” Miller says. “We’ve learned that online insurance isn’t as simple as putting up a web page. It’s far more in-depth, and it’s a far different business than a traditional brick-and-mortar business.”

Surex has relatively minor staffing costs, having changed its compensation model. Brokers are now paid 100% by commission, and not by salary. The new model has allowed the company to save money on staffing and re-invest that right back into the business, helping to propel their rapid growth. As a bonus, their brokers can focus on servicing clients instead of sourcing them.

“Our hope is to provide our brokers with all the tools they can handle,” Miller says. “They are extremely motivated to sell to and service that client, because they want that long-term commission on that client. It’s a different mentality than paying someone a salary and he or she just needs to show up and do their job for that day. Because of that difference, we’ve hired fantastic staff — we have staff who really care about their customers, and who really care about growing their book of business. For us, that makes it a scalable model.”

When Surex hires, it looks primarily for people who know how to deal with people. It helps to be an industry expert, but first and foremost Surex is looking for brokers who understand the mindset of their customers — what’s important to them and how to appeal to them.

Miller says it’s easy to teach someone about insurance, especially since Surex has largely simplified and automated the on-boarding process. But it’s a lot harder to teach someone interpersonal skills.

Since earnings are driven entirely by commissions, brokers can work as much or as little as they choose.

Brokers on the team can work remotely and hold team meetings through an online conferencing system. (Working remotely is essential for a company that has its office in a town consisting of less people than a single block in downtown Toronto.)

“Allowing people to work from home has been a great advantage to us because there’s a lot of fantastic moms who want to work in the industry, or individuals who currently have to drive an hour or two a day back and forth to work,” Miller says. “Now they can spend that time working, rather than in their car. So, I think we provide a really good employment opportunity for people who are self-motivated and know what they want to achieve.”

Profit expectations mark another difference between online and traditional brokerages. An online business is likely to take a few years to break even on a policy; in contrast, a standard brokerage expects to turn a profit almost immediately, or at least sometime during the first year.

Also, the pace of innovation generally differs between online and traditional brokerages. Constant innovation is essential for success in a digital-first brokerage. “We just continually reinvent,” Miller says. “Because it is a new distribution model, there’s lots to learn. Every time we make a change, we’re evaluating that change and determining what went right, what went wrong, and re-adapting – so it’s very fluid.”

Miller largely credits the success of Surex to being so nimble. The company runs differently than it did six months ago, never mind a full year ago. It cuts its losses quickly and moves on. This is proving to be a challenge as the company grows, but Surex is still trying to retain the spirit of a smaller business.

So where does the company go from here?

First off, they will soon be fine-tuning their quoting process for small package commercial business.

Besides that, artificial intelligence (AI) seems to be the next frontier. Once the stuff of futuristic movies, AI is increasingly employed by companies like Surex, which recently hired a full-time staffer with a Ph.D in AI. His role consists of examining business operations to discover efficiencies. What can AI do better and faster, so brokers can focus on tasks that add value to the brokerage? More importantly, how can AI aid brokers in assessing their clients for risk?

“We have no doubt AI is going to increase our profitability as a company.” Miller says. “The online marketplace is just now growing, it’s just emerging. And we have our big, hairy audacious goal…to be the dominant player in the industry.”