With both the federal and Alberta elections last year, educating rookie politicians on issues affecting insurance brokers was one of the activities that has kept (and continues to keep) Robyn Young busy as president of the Insurance Brokers Association of Alberta (IBAA).

By day, Young is a principal and member of the Board of Directors for Lundgren & Young Insurance Ltd., the Calgary-based business that she and her brother, A.J. Young, bought from their parents. She is also chief operating officer of Southland Registrations Ltd., whose services include vehicle and driver licensing. 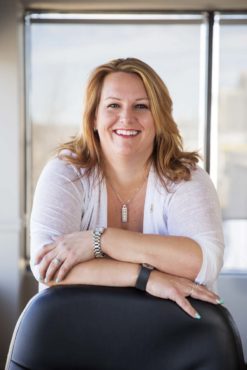 Young, whose term as IBAA president ends this May, has served as the association’s president-elect, vice president and chair of the Calgary local council.

IBAA is another thing that the brother and sister have shared. “My brother was the previous chair of the local council, and I was working on organizing some of the events,” she says. “The person that replaced A.J. stepped down and I decided I was doing most of the work anyway and I should just step up and take the credit for it,” quips the former Calgary director of the Professional Young Insurance Brokers.

“Being involved in the association and just being involved in our industry – it’s about the health of the industry as a whole,” Young suggests. One challenge to that health, however, is the pace of change.

“Technology is probably the biggest disruptor,” she comments. “Brokers in our industry have to recognize that insurance isn’t a 9-to-5 job anymore. Our customers need to be able to access us when and how they want to access us, and we have to adapt to that if we want to stay relevant,” she contends.

Brokers also “need to start thinking” about the effect, on the insurance industry, of the sharing economy and self-driving cars, Young recommends.

Government relations is a major activity for IBAA, and the federal Bank Act is “always on our radar,” she says.

Originally scheduled to be reviewed in 2017, the federal government reported in its budget document for 2016-2017 that it proposes to “extend the current statutory sunset date (for the Bank Act review) by two years to March 29, 2019.”

The extension “is probably good” for the insurance industry, Young suggests, adding that “we feel that banks ought not to sell insurance at the point of granting credit, particularly (property and casualty) insurance.”

As well, the delay will provide more opportunity for brokers to educate federal parliamentarians elected this past October. That education is just one way associations like IBAA are advocating on behalf of brokers, she says.

The federal election that resulted in a Liberal government came five months after the New Democratic Party (NDP) won a majority government in Alberta. That being the case, Young says IBAA officials are meeting with new members of Alberta’s legislative assembly as well.

“We have tried to get in and see as many MLAs as we can just to introduce ourselves and let them know about our industry and what we do and how we do it,” Young reports. “Lots of people have a lot of confusion on the difference between a broker and an agent, or a broker and a direct writer,” she explains.

Along with George Hodgson, IBAA’s chief executive officer, Young met with Alberta finance minister Joe Cici last July. “We had no indication at all that there were any concerns in our industry,” she recounts of the meeting with Cici.

“Obviously, when the NDP government was first elected, there is always concern that they may look at government auto, but we didn’t get any indication on that,” Young says. “Of course, that could change, but we didn’t receive any indication that that’s even something that’s on their radar. There’s nothing broken in our industry that needs to be fixed that way,” she adds.

One way that auto insurance is changing, however, is with the rise of telematics. IBAA plans to present a position paper on usage-based auto insurance to its members at the upcoming Annual General Meeting (AGM).

“It will be released to our members 45 days prior to our AGM and then voted on at our AGM,” Young says of the paper. “It is centred on who owns the data and, as an association, we believe that the customer should own the data and that it should be portable,” she says of the association’s general position on telematics. “There are five different positions and they all centre around that.”

Another key issue facing brokers in Alberta, as elsewhere, is overland flood coverage. In the summer of 2013, Canada’s costliest natural disaster, when measured by insured losses of almost $2 billion, took place in southern Alberta.

To address coverage gaps for homeowners experiencing water damage, Aviva Canada and The Co-operators Group rolled out overland flood coverage in the spring of 2015. RSA followed suit towards the end of the year and this past February, Gore Mutual announced the availability of its own product for some Ontario customers.

“There have been a lot of different products coming into the marketplace regarding overland water insurance,” Young says. “They all have their different pieces to them and that can be confusing.

We have to make sure the brokers have the knowledge to educate their customers and that their customers understand the coverage regardless of which company they’re with,” she says.

Like most insurance professionals, Young “fell into” the business. Born in Winnipeg, her family moved to Calgary in 1987.

“It was never necessarily my intent to grow up to be an insurance broker,” says Young. “When I was four, I wanted to be Wonder Woman. When I was in Grade 5, I wanted to be a lawyer, and I don’t think insurance was ever really on my radar,” she recalls.

just kind of becomes ingrained in you,” Young points out.

By the time she was 19, Young had started Southland Registrations, a family business. “I started on the front counter doing customer service and worked my way up to manager,” she says.

While Young was at Southland Registrations, her parents operated Lundgren & Young in partnership with Jack Lundgren, who founded the brokerage in 1983. Her parents acquired Lundgren’s interest in the business in 2000, and then two years ago, sister and brother bought the brokerage from their parents.

Young’s roles with Lundgren & Young have included managing a branch office and administrative responsibilities. “I have done a bit of everything here and there,” she says.

While not busy with her jobs at Lundgren & Young and Southland Registries – or volunteering with IBAA – Young’s favourite past-times include camping and riding her Harley motorcycle.

Her experience as IBAA president has also been “truly rewarding,” allowing her to get to know many brokers and other professionals in the industry. “If I could do it again, I would do it again in a heartbeat.”