Wildfire was the most expensive peril for the global insurance industry in 2018, and the risk is getting higher in Canada.

Now for the good news: government scientists are working on maps that would help give the industry a better idea of which specific neighbourhoods are at risk of wildfire.

As of press time, Canada has made it through most of 2019 without any major insured wildfire catastrophe losses. As of Aug. 29, a total of 3,873 reported wildfires in Canada had burned more than 1.8 million hectares of land, according to the Canadian Interagency Forest Fire Centre (CIFFC). The total number of fires this year is on pace to finish well below the 6,444 recorded at this time last year. 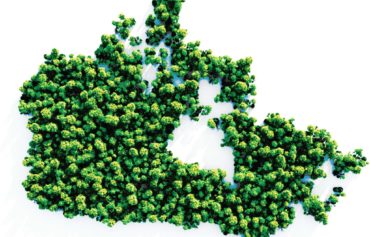 Nevertheless, insurers who paid out more than $3.7 billion for wildfire damage in Fort McMurray, Alta., in 2016 remain on high alert. Canadian P&C insurers are more concerned about wildfire risk now than they were 20 or even 10 years ago, says Urs Uhlmann, AXA-XL’s country manager for Canada.
The key is to get a handle on wildfire loss exposure.

Wildfire exposure
“In Canada, the number of properties at risk is definitely increasing, however we don’t actually have any numbers right now on how much it has increased,” says Lynn Johnston, a Sault Ste. Marie, Ont.-based forest fire research specialist for Natural Resources Canada.

The agency is currently working on a national fire risk mapping study for Canada. The government hopes to have the data available to the industry and the general public in 2020. The idea is to have colour-coded maps indicate wildfire risk in any given area.

“I have been talking to a lot of insurance and reinsurance companies and they are pushing for any kind of information,” says Johnston. The maps are “not super high-scale,” she adds. “You would not be able to use them for each individual house. It takes more of a neighbourhood kind of a look. But it would give you a much better idea of the risk for a neighbourhood overall.”

To complete the mapping, Natural Resources Canada set an internal deadline of the end of the fiscal year, which is Mar. 31, 2020. How exactly insurers will be able to access the maps has yet to be confirmed. Johnston says the data will be available to anyone who requests it, possibly through the government website or an FTP site.

The 2016 Fort McMurray wildfire was the most expensive insured loss in Canadian history, reports A.M. Best Company Inc. Most of those losses were picked up by non-Canadian reinsurers.
Canada placed third (behind the United States and Indonesia) in a Lloyd’s report that ranked countries with the greatest amount of economic damage from wildfires between 1990 and 2012. Canada suffered $6.46 billion in economic damage from wildfire, Lloyd’s reported in Wildfire: A burning issue for insurers?

The country’s most expensive losses have happened in Alberta, although all Canadian provinces and territories are at risk of wildfire, said Johnston. “Just because it does not happen often, and there have not been those big events like Fort McMurray and Slave Lake, that doesn’t mean it can’t happen anywhere,” said Johnston. She cited Parry Sound 33, a huge wildfire that affected central Ontario last year, as an example.
“Nova Scotia, despite it being a wet province, has a lot of wildland-urban interface areas and there could be problems even there,” Johnston says. There is also the possibility of losses in suburban Vancouver. A lot of fuel could burn in that area, but the fact that it is also very wet reduces the risk, adds Johnston.

What’s behind the losses
The growth of properties in the wildland-urban interface (WUI) is contributing to larger and more deadly fires in California, Swiss Re says in Natural catastrophes and man-made disasters in 2018: “secondary” perils on the frontline. Worldwide, factors increasing wildfire risk include climate change, population growth and urbanization.

The WUI is where housing meets or intermingles with wildland vegetation, said Miranda Mockrin, a Baltimore-based research scientist for the United States Forest Service.

Globally, most insured wildfire losses have resulted from property damage in the WUI, Lloyd’s said in Wildfire: A burning issue for insurers? In the United States, the number of homes in the WUI grew 41% —from 30.8 million in 1990 to 43.4 million in 2010, Mockrin said in an interview. Similar figures are not available for Canada, said Natural Resources Canada’s Johnston.

There are two types of WUI, observes Mockrin.

One type, typically low-density, includes homes that are sort of interspersed or intermingled with vegetation. The second type does not have much vegetation directly next to homes, but the homes are near a sizeable amount of wildland vegetation. This is significant for insurers because buildings that are not immediately adjacent to vegetation can still be lost or damaged as a result of wildfire.
The U.S. Forest Service recently studied buildings in California that were lost to wildfire from 1985 through 2013. The results were published in a recent article in International Journal of Wildland Fire.
“We were sort of surprised by the results,” says Mockrin, who co-wrote the article. “We found that over 80% of all the buildings lost were in the WUI. But about 50% of them were in that area where you have housing that is not sort of immediately surrounded by wildland vegetation.”

“I do think brokers can play a major role in pointing out the various resources that are available for preparation,” said AXA-XL’s Uhlmann, citing the Institute for Catastrophic Loss Reduction (ICLR) as an example of one such resource.

What makes structures particularly vulnerable are roofs made of untreated wood shakes, warns ICLR, which advises that using metal, asphalt, clay and composite rubber tiles are better options.
Risk mitigation measures recommended by ICLR include cleaning debris out of roof gutters and not storing firewood or propane tanks within 100 metres of the home. In the zone between 10 and 30 metres from the home, property owners can reduce risk by spacing trees at least three metres apart.

AXA-XL observes that many wildfire losses are not caused by the fire itself.

“Where there is fire, there is smoke,” Uhlmann says. “It’s not necessarily direct fire impact that creates the problem. The business interruption and the damage that happens because of smoke or ash is much more difficult to predict. It’s not just how close you are to the forest.”

It’s also a question of whether your client’s building is vulnerable to having smoke or ash blown in through ventilation.

“A lot has been written on how to prepare for the next big [wildfire],” says Uhlmann. “I do believe there is a big opportunity for all our customers to reduce the damage to their business and consequently get back up and running.”