As a teenager during the 1980s, one of Sam Natur’s hobbies was writing computer gaming software. Three decades later, Natur continues to apply his computer skills – this time as president and chief executive officer of Bullfrog Insurance Ltd., a Mississauga, Ontario-based brokerage that sells commercial coverage over the Internet.

“Bullfrog is something that’s sort of long overdue for the industry,” he suggests of the brokerage, established in 2013 by the Canadian Broker Network (CBN), made up of seven brokerages, and launched in March 2015.

“We may say the industry is moving very quickly and all that, but I think we often forget that the customer out there is not benchmarking Bullfrog or anyone else against the insurance industry. They are benchmarking us against Amazon,” he says. 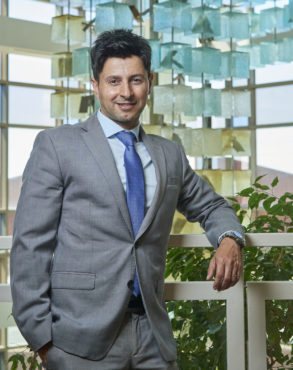 “I received a summer scholarship to attend Université Laval,” north of Montreal, Natur says. “I guess on my way back I thought, ‘It’s a bit of a corner-cutting job if you do French during the day, but you go home and speak English… so I thought, ‘I’ll spend a year there.'”

Natur actually spent more than a year at Laval, eventually earning a masters degree in literature with a minor in French. He is fluent in both of Canada’s official languages, as well as Arabic, his parents’ first language.

“It’s a funny thing,” Natur suggests of his academic specialties. “Growing up, I was really into computers. I was programming games by the time I was 14 years old,” he recalls, using the leading-edge technology of the day: the Commodore VIC-20 and the Commodore 64.

“My dad was always saying, ‘Hit the books,'” Natur says. “He viewed the computer as a toy rather than an actual tool, so I got the degree to satisfy my parents. I did well in it, but as soon as I got out, I went into project management and, eventually, back into IT,” he adds. 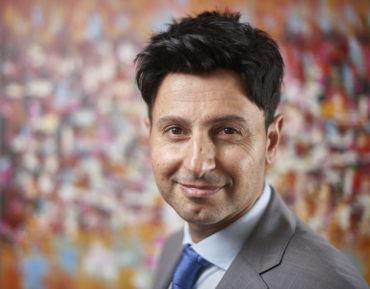 While studying for his graduate degree, Natur was employed by World Travel Protection Canada Inc., working on air ambulance repatriations. The work was nowhere close to what he had studied.

“I did nothing career-wise based on my education,” Natur points out. “When you’re bringing back ailing patients, you have to make sure the airline’s got oxygen for them, that there is a hospital bed secured here in Canada, air ambulance crews are on standby, that everything is transitioning smoothly with the medications and all that,” he says. “It really took a combination of insurance and project management and absolute delivery management.”

Before taking the helm of Bullfrog Insurance, Natur spent almost 15 years as a management consultant, most of them as principal of Natour|Global, the consulting firm he founded in 2001. Over the years his clients have included, among others, Deloitte, IBM Global Services, BDO, the Toronto-Dominion Bank, the Canadian Imperial Bank of Commerce, Symcor, the Royal Bank of Canada and some government clients.

One client was Aviva Canada Inc., which starting in 2010, retained Natur as a program manager, a role he held in launching online brokerage Insurance Hunter Services Inc. four years ago. 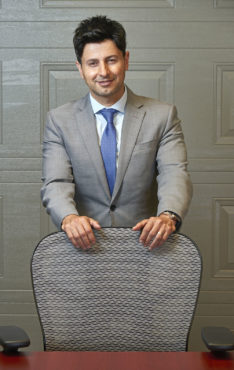 He then went on to work for Mississauga-based MedAvail Technologies Inc., which makes the MedCenter automated pharmacy kiosk. It is a product Natur cites as an example of a technology that is challenging people’s assumptions.

“You would say, ‘Holy smokes, if I am dispensing narcotics, I’ve got to be talking to the person face to face,'” says Natur. But with MedCenter, users can have a video call with a pharmacist based in a different location.

Around the time, he was working for MedAvail Technologies, officials with CBN were referred to Natur by Aviva Canada. “Bullfrog was a concept the owners of the seven CBN brokerages wanted to bring to market, but did not have the time or project management expertise to do so,” explains Natur, who, along with the seven CBN brokers, now own the brokerage.

“I was brought on board to build and launch Bullfrog and, subsequently, was offered the opportunity to be chief executive officer and president,” he says. It took “pretty much all of 2014” to establish the brokerage “and work through all the mechanics with the insurers,” before officially launching the following March.

The brokerage currently places insurance for commercial clients in Ontario, British Columbia and Alberta. Approximately 40% of sales are online, Natur reports, but adds that the portion is “certainly climbing.”

The lion’s share of the brokerage’s prospective customers are in the building trades, followed closely by office professionals such as management consultants, executive trainers and software and IT consultants, he notes.

As prospective customers are filling out applications online, Bullfrog Insurance can see the data being entered.

“We have notifications in here that show us a visitor has come, they are a returning customer, and when they get stuck, we surface our chat box and say, ‘Hey, can I help you out with this?'” Natur says. Between 8:00 am and 8:00 pm eastern time, the brokerage has “a licensed agent right there walking them through the tough questions while leaving them alone if they want to get through there quickly and efficiently.”

Outside of those hours, the chat capability is still available and the ticket is dealt with first thing the next morning.

“We often just get on the phone with them,” Natur says, but not always. “When you think about small business owners, they are the quintessential multi-taskers. That’s somebody who is more than happy to continue the process online and through chat,” he notes.

Customers can apply for insurance, pay premiums by credit card and have it bound without signing paper, Natur says. There is an attestation on the website explaining that everything must be correct and true.

If anything is found to be false, “the premium could increase or the policy could be void,” he notes.

Once the customer applies a checkmark showing they understand things, they type in their name and purchase. Customers can then receive insurance contracts in PDF format by e-mail.

A lot of building trades people are applying for commercial coverage from mobile devices, Natur reports. “I can tell you, several days a week, I get notification of a purchase well before 7:00 am, and that could be somebody on their way to the job site and you can see it because the system says the person has been quoted a premium, and two minutes later there is the purchase,” he says.

Flexibility is just one way in which providers can give the customer what he or she wants and demands. Industries outside of insurance are being disrupted as a result of changes in customers’ expectations, he suggests.

“You can say, ‘the technology changed’ or ‘the processes changed,’ but really the customer changed,” Natur comments.

“Television is going through unprecedented changes now with the arrival of shomi and CraveTV and Netflix,” Natur says as an example. “I was streaming back in 2006. I was an early-adopter, but by 2010, people were coming on board to this and now, it’s become so simple and easy that I don’t think there’s a single household right now that only has television.”

There is now more of a comfort with technology and doing things online, including shopping, and the insurance industry needs to get on board.

“I think everybody is doing the best that they can with the circumstances that we have,” Natur says. “But I think sometimes we have to step back and go, ‘Hold on, I’m going to sit here and say that I can’t sell this online in the office today and then I’m going to go home and I’m going to buy my vitamins online.’ We don’t see the double standard there.”