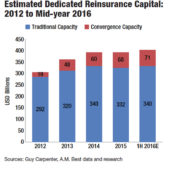 Amid falling reinsurance prices and rising concern that cedents have released much of the redundant reserves they built up a decade ago, some industry observers say that by buying more traditional reinsurance, carriers can help protect their balance sheets in the event of a major catastrophe.

“In Canada, as elsewhere, reinsurance helps in managing the volatility of the portfolio, while helping the insurer to grow their business,” says Joseph El-Sayegh, president and chief executive officer of SCOR Canada.

Increasing reinsurance spending “can minimize volatility and protect cedents’ balance sheets in the event of major natural catastrophe losses, large man-made disasters, sudden macroeconomic changes and adverse reserve development issues, or a combination of all four,” Mike Reynolds, global chief executive officer for JLT Re, explains in a statement announcing the late-July release of the report, Reinsurance: The Price is Right.

“Overall, demand for property catastrophe reinsurance has increased slightly throughout the private market as insurers continued to benefit from accretive reinsurance capital in many regions,” Aon Benfield notes in its own report, Reinsurance Market Outlook: June and July 2016 Update.

“In addition, continued evaluation of rating agency changes has resulted in increased demand from some insurers,” Aon Benfield adds.

As all this unfolds, reinsurance prices continue to drop, with JLT Re reporting “four years of falling reinsurance rates across most lines of business.”

However, A.M. Best Company Inc. suggested in June the “January renewal season seemed to indicate that market pricing for global property and casualty reinsurance had not yet hit rock-bottom.”

In Global Reinsurers Continue To Withstand Challenging Market Dynamics, A.M. Best points out that both January 1 and April 1 renewals “do not appear to have spawned any significant hope that price stabilization is on the horizon any time soon.”

Canada, of course, “has been a big story this year, with the Fort McMurray wildfires,” comments El-Sayegh. “Insurers and reinsurers need to work through the lessons from the loss and the impact on pricing, structures and terms and conditions,” he says.

Catastrophe losses – adjusted for inflation to 2016 – were US$133 billion worldwide in 2011, but have been lower in each of the four subsequent years, notes the report from JLT Re, the reinsurance broking arm of Jardine Lloyd Thompson Group plc.

“The Fort McMurray wildfire in Canada and other global weather-related catastrophe activity in the first and second quarters of 2016, generating more than US$10 billion in insured losses globally, has already begun reversing the favourable recent catastrophe loss trend, although the reinsured portion of these losses is still well within annual catastrophe budgets,” A.M. Best states.

In 2016 H1, Aon Benfield reports that there were five catastrophe events with more than US$1 billion each in insurance losses. Beyond the Fort McMurray wildfire, those events included earthquakes in Japan and flooding in Europe.

“Carriers with the foresight to exploit today’s cost-effective reinsurance can help secure future profitability by preparing for the next unforeseen event(s), which could precipitate or accompany a turn in the market,” Reynolds suggests in the JLT Re report.

El-Sayegh suggests primary insurers can also work with their reinsurers to develop new products, such as flood and water-related coverage for homeowners.

“Well-priced reinsurance can be found when buyers, reinsurers and general managers jointly develop a product offering and provide proof of its profitability,” he says. With flood coverage in Canada, for example, “models have improved greatly and the coverage is taking shape.”

RETENTION: UP OR DOWN?

For a cedent, the decision to increase or decrease retention “is usually driven by a company’s appetite for risk and its surplus position – whether they can afford to keep more,” explains Cam MacDonald, senior vice president and chief agent in Canada for Transatlantic Reinsurance Company (TransRe). “That’s a decision that (cedents) have to make, but it does boil down to each company’s risk appetite and what they are willing to retain, so it will vary by company and by size of company,” MacDonald says.

In the past five years, JLT Re points out, the p&c market “has been dominated by net reserve releases and a significant influx of third-party capital.”

Insurers “are now likely to have released most of the redundant reserves they built up between 2003 and 2007, and there is, therefore, growing concern that releases may start to dry up,” the JLT Re report suggests.

“Around the world, we have seen insurers centralize purchasing and retain more, particularly multi-national insurers,” El-Sayegh reports. “Centralized purchasing can have price benefits, but at the cost of increased volatility and higher capital requirements. Further, managers of Canadian insurers are interested in maintaining access to reinsurers’ local market expertise in centralized purchasing structures,” he maintains.

As of June 30, there was US$22.3 billion in issuances outstanding in the insurance-linked securities (ILS) market, notes Swiss Re Capital Markets’ Insurance Linked Securities Market Update, which was released August 5. ILS issuance “came to a screeching halt” after April 30, the report states, adding that there were more maturities than issuances during the first half of 2016.

In Canada, activity in the ILS market “has been mild,” MacDonald suggests. “I think that most clients prefer the usual methods of transferring risk and that’s the traditional reinsurance market,” he says.

“Reinsurance is now potentially the best-priced source of capital for most carriers,” states JLT Re. “Reinsurance buyers can secure competitive advantages by anticipating cyclical change,” it adds.

The reinsurance market “is about to undergo further change,” JLT Re predicts. “There is opportunity now for carriers to seize the moment and utilize highly competitive reinsurance as a capital optimization tool. Indeed, analysis carried out by JLT Re shows that reinsurance, at current pricing levels, is increasingly a more efficient form of contingent capital than debt, equity and carriers’ own capital,” the report states.

As a reinsurer, TransRe “can discuss ideas with (insurers) to ensure every angle is considered,” MacDonald notes. “We can create the right risk-sharing structure to support new ventures.”

Still, many primary insurers are “looking for opportunistic buying,” Claudette Cantin, senior vice president, chief actuary and chief risk officer of Munich Re Canada, said during a panel discussion earlier this year. Cedents generally “have much more capital than they used to have,” Cantin told those attending Insurance Bureau of Canada’s Financial Affairs Symposium.

“They are more sophisticated, they can model and look at the impact of the reinsurance on their capital position,” she explained. “Given their strong capital position and their level of analytics they can do, they have greater capability and they are certainly more willing to keep more of the volatility and that we can see through higher retention, for example,” she added.

Worldwide, the non-life insurance sector “remains well-capitalized with solvency at a record high of 130% in 2015, up from 124% in 2014,” Swiss Re states in a recently released sigma report, World Insurance in 2015: Steady Growth Amid Regional Disparities.

“Although capitalization is expected to remain strong,” Swiss Re notes in the report, the support from higher unrealized gains due to ultra-low interest rates will disappear once rates begin to rise (in the United States and the United Kingdom mainly.)

For cedents, El-Sayegh cautions there are some consequences to retaining more risk. “Increased retention increases the capital needed to maintain the same solvency ratio,” he points out.