The gap between those who are insured against catastrophes and those who aren’t is still noticeably wide, particularly as storms are supposed to get worse. Monica Ningen, president and CEO of Swiss Re Canada and English Caribbean, describes  what can be done.

cu | Hurricane Dorian brought to mind the issue of the protection gap. What can be done to help close the gap?
I think it’s important to recognize that countries are more or less vulnerable to specific disaster risks according to their level of preparedness and ability to absorb those losses.

It really goes back to the specific area that you’re talking about — whether you’re in a developed or underdeveloped economy — and the maturity of the local insurance market. 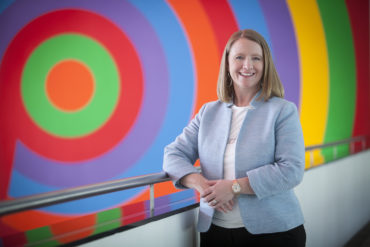 Monica Ningen, president and CEO of Swiss Re Canada and English Caribbean

For example, compared to other markets, The Bahamas have an insurance take-up rate of about 40% of the properties insured. That’s pretty good on a relative basis. Yet that still leaves more than half of the properties uninsured and exposed to financial challenges following devastation such as Dorian.
As in most other countries, a lot of the uninsured properties are often low-income housing; the property owners don’t have the financial means to afford insurance or access to affordable insurance.

cu | So what can be done?
It requires collaboration between the insurance industry and public entities, and then financial assistance in some way, shape or form. An important part of that conversation is also around mitigation – making sure that people are living in places that are resilient over time.
Another way to narrow the gap between economic and insured losses is to use innovative solutions or low-cost products that can really help countries and/or the cities that they live in recover after a big setback.

cu | What’s an example of an “innovative solution”?
A parametric cover is a great example, but it could also be an innovative form of distribution.

For example, somebody may not have access to an insurance agent and so how else can you distribute the product? You might look for things to which most people have access; in most instances, that would be mobile phones. And so how can a mobile phone enable insurance to be distributed and to get insurance money into the peoples’ hands during a disaster?

Pair this with education. It’s really important to educate the public on the value of and need for insurance. In some places, you have people that trust their government to bail them out more than they trust insurance companies.

Once a risk is understood, people can take the necessary steps to think about how they can mitigate the risk or how the risk fits within the picture of their overall financial resiliency. Some people might choose to save more money [e.g. not transfer the risk to insurance], while other people will choose to buy insurance. But it needs to be a recognized choice.

I think in some situations people either don’t understand the risk to which they are exposed, or they take for granted that they will get some sort of assistance once a large catastrophe happens. We must continue to build public awareness of the insurance industry’s value proposition; at the same time, we must work with governments to change the public dialogue. People should be made aware that when catastrophe happens, the insurance industry is quite often an important part of economies bouncing back faster.

cu | Looking at Canada, what are your options if the industry experiences another Fort McMurray-style catastrophe event? How sustainable is that for a reinsurer?
As an industry, we need to continue to improve our understanding of catastrophic events.
That involves understanding climate change and its impact. Also, it requires spending more time on perils that haven’t received the same attention or focus as other perils have in the past.
If you look at peak perils across the world, most of the really extreme perils we talk about are earthquakes, hurricanes and typhoons — they are the headliners.
Wildfire has received a lot of attention over the past three years or so because it has produced a significant amount of loss.
Wildfires occur every year and the number of fires, their severity, and the size of area burned varies quite significantly. Total insured losses from wildfires in 2018 amounted to around $17 billion globally, a new record.

cu | Can you talk more about the wildfire peril in Canada?
In recent years, the annual number of fires in Canada appears to have remained flat or has even modestly declined, although the area burned appears to be on the rise.
The frequency is down, year-to-date. Overall, the number of observed fires is below the country’s 10-year average — except in Yukon, where there has been slightly more activity. The intensity, the total burned area year-to-date, is down below the 10-year average. The exceptions are Alberta, Ontario and Yukon. In those three provinces, the total burn has more than doubled in comparison to the 10-year average.

cu | How do you think the wildfire risk will play out?

We expect wildfire risk in Canada to grow.
More people are settling in that wildland-urban interface area. Plus, longer periods of warm, dry weather are lengthening the fire season in Canada and across North America.

cu | Let’s go back to the big picture. Can you elaborate on your earlier remarks about the long-term sustainability of catastrophe insurance?
When you take time and really dig into some of these perils that maybe we haven’t spent time on before, this allows us as an industry to assess the risk properly and set the right terms for an insurance cover that can be provided for the long-term. Now as part of that conversation, it’s possible that the current insurance rates set for a given peril or geography are not affordable to people longer-term.

cu | What happens then?
In that situation, you have to think about mitigation. Do we need to work with the local government to think about where and how people build?
If we’re going to allow them to build in an area where traditional insurance is no longer affordable, then it goes back to the public-private partnership and what else can be done.
For example, is there a lower-cost parametric cover that a city could buy to help recover afterwards? There are a lot of options. But it does take work and collaboration across many different entities that don’t always collaborate on just your traditional policy.

cu | How do you view the current state of Cat models?
There is no doubt in my mind that the industry is better off with the analytics today than we were 10 years ago; that includes Cat modelling.
Cat models have made continued progress. Modelling estimates have become what I would call reasonably reliable when it comes to estimating early losses. Recent events have provided much-needed data to enhance and then to collaborate those model assumptions such as building vulnerabilities, for example.
But Cat models are just one piece of the puzzle. Models are just models; they are never going to fully reflect reality, especially just one model.
Think about the forecast of a hurricane path. With all the data and model runs we have, it’s still a really challenging thing to predict several days out because there’s so many different variables that play into it. That’s very similar when it comes to coming up with actual loss.
Go back in time to Hurricane Katrina. Models didn’t estimate that the levees were going to fail. That was probably a super-low probability in any model, yet they failed and the loss is a lot higher than any model would have shown at that point.
Models are only as good as the data you put in them and they rely on adequate reporting and updates of property values.

cu | What else needs to be considered?
The economy and its dependencies, the resiliency of the electrical infrastructure — there are so many other components that now play into what a total loss estimate will be.
Companies today not only look at Cat models, they’re thinking about the area, how quickly can they get adjusters in, and how effective those adjusters can be.

Title: President, CEO of Swiss Re Canada and English Caribbean
Past experience: Previously Swiss Re’s head of property underwriting for the U.S. & Canada and chief property underwriter. Ningen joined Swiss Re following the acquisition of GE Insurance Solutions (GEIS) in June 2006. During her time with GEIS, Ningen was responsible for catastrophe risk management globally.
Industry contributions: Ningen is a frequent speaker and panel contributor at industry conferences and events on the topic of resiliency, closing the protection gap, and diversity and inclusion. She served on the board of directors of the Insurance Institute for Business & Home Safety from 2014-18. She currently serves on the board of directors for Insurance Bureau of Canada and the Institute of Catastrophic Loss Reduction.