Standing out in the crowd

That’s because the force of Einstein’s identity turned him into a recognizable brand. His personality and ideas made him stand out from the other great thinkers in his field. He still influences our thinking today, which is remarkable considering he’s been dead for almost 65 years.

Einstein became synonymous with not conforming to the traditional dictates of the scientific field. His thinking was different. His hair was not neatly kept like his predecessors or colleagues. There’s a famous picture of him with his tongue hanging out, showing his eccentric side. In Einstein’s era, scientists didn’t typically act in such a manner. And as a scientist, his accomplishments were unparalleled. 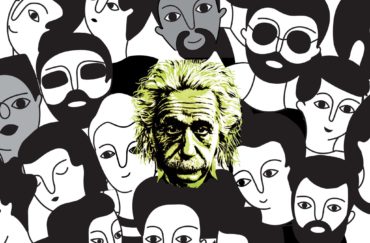 Now, apply this line of thinking to the insurance industry. Do any companies, brokerages or carriers, truly stand out? Or do most seem the same? It’s not surprising to hear brokerages using similar messaging when they promise to take care of client needs, speedy service, the best rates, etc. So, if everyone’s messaging is similar, how do you differentiate?

Terry O’Reilly, a CBC broadcaster and advertising guru, offered some lessons recently as the keynote speaker at Gore Mutual’s Fast Forward Idea Accelerator, an event held in both Vancouver and Toronto. The first step, he told the audience, is to define your brand. Tell people what you stand for. “In other words, it’s a crystal-clear definition of what makes your company unique,” he says.

In contrast, consider the example of big brands like Nike, Apple and WestJet. Nike stands against making excuses for not exercising [“Just Do It”]. WestJet stands against cold corporate culture [“Why do WestJetters care so much? Because we’re also WestJet owners”]. Apple stands against concentrating computer power inside corporations [“1,000 songs in your pocket”].

Take an example from the insurance world. Simplicity is the key branding message from belairdirect.

“For consumers, 90% of insurance is complicated. It’s hard to understand. We do strive as a brand to make insurance simple for all of our consumers,” says Humberto Valencia, the company’s vice president of marketing and digital strategy.

belairdirect is an example of a company standing against complication, O’Reilly says. [Economical’s Sonnet Insurance would be another.] But at the same time, Valencia tells Canadian Underwriter, that’s not by design. belairdirect didn’t sit around the boardroom and say their messaging was going to focus against complexity, says Valencia. And it’s not the slogan at the end of their commercials. Simplicity is an ethos that goes beyond belairdirect’s marketing.

“Everything we do internally in terms of sales processes, operations, [and] tools we develop for our clients is to make insurance simple for the end consumer,” he says. “So, that’s the emotion we’re going after. It’s simple. It’s easy.”

Emotion is also linked to branding. Customers have to feel what you’re telling them and feel connected to your brand.

“When everything else is equal, customers will choose the company they feel the most positive about,” O’Reilly says. “It is a visceral decision, not an intellectual one.”

Insurance actually has an advantage over other products because intense emotions are linked to the delivery of the product to consumers, says O’Reilly. For example, insurance becomes an emotional experience when a person suffers a loss involving their homes, cars and businesses. They are seeking protection. And so, when it comes to linking insurance an emotional appeal, half the race is already won, O’Reilly says. “I’ve spent my entire career trying to infuse emotion into car tires and doughnuts. Your product has emotion built into it.”

Backing up the claim of simplicity is also important. Valencia points to the ability to handle something as small as an address change to something bigger like an accident claim, all via the company’s app. That’s where Valencia feels his company makes the biggest impact and shows value to customers.

“Even when you think about a claim, the client pays us so that whenever they have trouble with their car or their home, we’re there for them,” he says. “You have a car accident, you take a picture and upload it; when you talk to the agent on the phone, he’s already informed about what’s happening. That’s why it’s so important: it’s a clear brand differentiator. Not just as a marketing message but as a whole client experience.”

Finding that differentiator is key for any business, O’Reilly says. “If you look and act like everybody else in your category, then you’re just a commodity. That is the worst position to ever find yourself in the marketing world.”

O’Reilly said insurance companies and brokerages should be asking themselves some key questions:

“Those are the building blocks of branding,” O’Reilly said.

Help for answers to some of those questions can come from listening to the customers’ needs and wants. Valencia points to mobile usage trends.

The key to a marketing platform is to consider these three questions:

belairdirect recently launched a series of commercials with mixed martial arts legend Georges St. Pierre. In the ads, the fighter’s trainers cut short part of his training so that they can drive less and more safely, thus saving money on their car insurance. The ad would have been fine with anybody playing the role of the fighter, but belairdirect wanted a famous face to make it memorable. On top of that, the company leveraged its familiar mascot, the animated knight, to help the consumer link the ad to the company.

Such details help to create lasting brand impressions that are critical to standing out in a crowded marketplace, O’Reilly says.